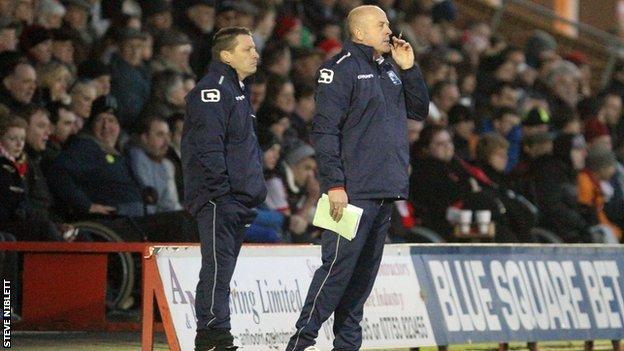 "We've been in discussions with Martin and Andy over a new two-year deal and we're delighted with the way they have gone," said chairman David Keyte.

Meanwhile, Foyle has confirmed there has been some interest in his highly-rated young midfielder Harry Pell.

"It's minor - it's a couple of Conference clubs, so I wouldn't be too excited

"There was a little bit of a tentative enquiry, but nothing has materialised and they have pulled out," said Foyle.

"I think we can all start to believe things. Something is going to happen but, at the moment, we are probably only 10 per cent of the way down the line.

"There is a lot of work to be done if they want to entice one or two players away from here.

"It's minor - it's a couple of Conference clubs, so I wouldn't be too excited.

"Some go the long way around and it does take a bit of time so it could pop up at the end of January. If it does, it does and if it's income for the club, then great."

Londoner Pell, 21, started his career at Charlton Athletic before moving to Bristol Rovers on a one-year deal in July 2010.

He then moved to Edgar Street in July 2011 on a two-year contract, following an initial stay on loan. He has hit four goals in 60 games for the Bulls, as well as scoring twice in a seven-game stay on loan at Cambridge in March.

Hereford, unbeaten so far in 2013, stand 11th in the Blue Square Bet Premier table, having drawn their last three matches since starting the year with victory over in-form Kidderminster Harriers at Aggborough.