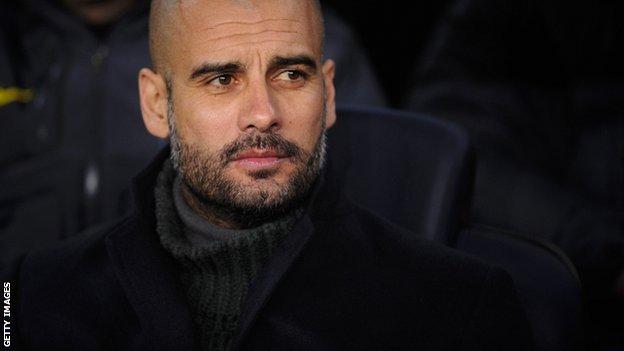 Pep Guardiola was not influenced by the money on offer in his new role at Bayern Munich, according to the club's chairman Karl-Heinz Rummenigge.

The ex-Barcelona coach, 41, has signed a three-year deal to become Bayern's new manager at the end of the season.

But other clubs such as Chelsea and Manchester City had been linked with the Spaniard.

"If it were purely down to money, then Bayern would have had no chance," Rummenigge said.

"I think he was impressed with our overall concept. Of course he'll be earning a few euros here too, but if finances had been the defining factor, then he would not be coming here on 1 July.

"He was pleased with the way we have established a financial independence."

Guardiola, who will replace retiring Bayern boss Jupp Heynckes, has been a coach in demand since stepping down as Barcelona coach last summer, where he won 14 trophies in four seasons.

He decided to take a one-year sabbatical, but several European clubs have courted the former Barcelona and Spain midfielder.

Chelsea, Manchester United, Manchester City, AC Milan, Roma and Paris St Germain have all been reportedly associated with him.

Speaking last week about the speculation before the Bayern deal was announced, Guardiola said: "It made me feel bad for the coaches who were in the clubs at the time.

"I personally wouldn't like it if I was coaching somewhere and my club was releasing this kind of information while I was still there."

Guardiola retired from playing in November 2006 and was named Barcelona B coach in 2007, but spent only a year in charge before being promoted to replace Frank Rijkaard as boss of the senior side.

Under Guardiola, Barcelona established themselves as the dominant force in club football, with two Champions League crowns and three La Liga titles among the trophies claimed by a side containing Lionel Messi, Xavi and Andres Iniesta.

He added: "We won a lot [at Barcelona] and that's why I'm more in demand now than when I started out, when only three or four people at Barcelona believed in me."

Despite offers from elsewhere, Bayern are Germany's richest football club and Rummenigge believes his name will be a big draw to top players.

"Of course he is a coach with great charisma and there are players who would love to work with a coach like him," he added.