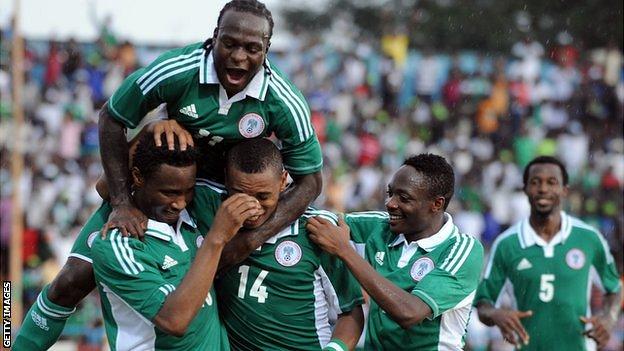 Nigeria will be desperate to erase the memory of failing to qualify for the 2012 finals - and their 6-1 thrashing of Liberia, which secured their place in South Africa, shows they mean business.

The Super Eagles have an excellent record in the finals - lifting the trophy twice, finishing runners-up four times and coming third seven times. Only in 1963 and 1982 (first round) and 2008 (quarter-finals) have they failed to collect medals and they look to have a decent chance for at least a last-eight place.

Nigeria fans are optimistic that Stephen Keshi - who skippered Nigeria the last time they conquered Africa with a 2-1 triumph over Zambia in Tunis 19 years ago - can repeat the feat as coach.

Centre-back and captain Joseph Yobo, poised to equal the record of former African Footballer of the Year Nwankwo Kanu by playing in six Cup of Nations tournaments, is the defensive general of the Eagles.

Much is expected from Chelsea pair John Obi Mikel and Victor Moses in midfield, and Ikechukwu Uche from Spanish outfit Villarreal is the probable attacking spearhead.

While refusing to get carried away about his team's chances, Yobo is confident his side will give a a good account of themselves.

"Winning the trophy is not going to be easy, but I promise we will give it our best shot," said the former Everton defender, who is now based in Turkey.

"I urge Nigerians to keep praying for us and to believe in this team.

"We are travelling to South Africa ready to don the colours of our nation and we will not relent until our goal is reached.

"Luckily, we have a coaching team that understands us well and I am sure the players are ready to deliver."