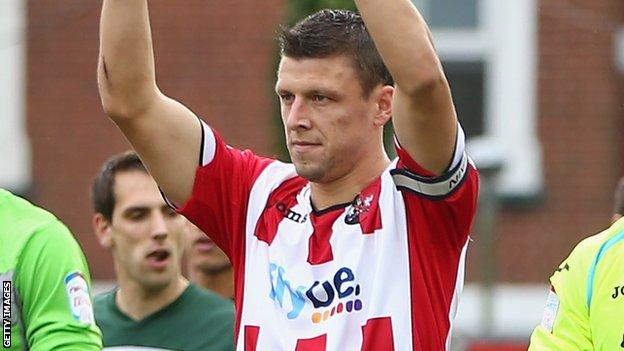 Exeter City captain Danny Coles he is happy for the club to be out of the spotlight in League Two.

The Grecians have won three of their last four games and have moved into third place in the table, two points clear of fourth-placed Rotherham.

"People aren't raving or shouting about us doing this or doing that like Port Vale and the Gillingham, so we're quite happy with that."

Exeter could break their record for away wins when they travel to Coles' on Saturday.

City have already won nine times on their travels ahead of the trip to bottom-placed Rovers.

"People aren't expecting us to achieve too much with regards to other teams," continued the 31-year-old defender.

"There was a guy on TV that called this club 'minnows' - I'm quite happy with that.

"We'll keep going about our business and hope to get points here, there and everywhere."

And Coles hopes to lead City back into League One at the first attempt, following their relegation from the third tier of English football last season.

"That was the goal from day one," he added.

"To get back to League One at the first attempt would be a good achievement."