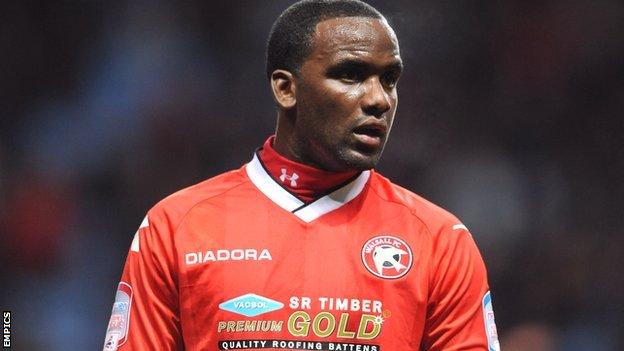 Walsall are keen to sign Craig Westcarr following his exit from Chesterfield.

The 27-year-old striker, released by the Spireites last week after returning from a six-week loan at Bescot, is now back training with Walsall while he contemplates his next move.

"He's a great lad. He did a good job for us in the six weeks that he was with us and I'd like him to stay. But we've got to come to an agreement."

Westcarr failed to score during his Saddlers loan, but his unselfish running up front helped the club's reverse in fortunes after a 16-game winless run - and he was only on the losing side twice in eight games.

Craig Westcarr's keeping his options open and, if a better offer comes in, he might go. But I'd like him to stay

"He's training with us while we discuss an opportunity for him to join us," added Smith.

"His contract got cancelled with Chesterfield so he's looking for a new club and he chose to come and train with us. And we're only too happy to have him in and around the club.

"He's keeping his options open and, if a better offer comes in, he might go.

"But he's got to be careful with what he chooses as, if he signs for one more club now, he can't sign for anyone else."

Westcarr was Nottingham Forest's youngest-ever player when he made his debut at the age of 16.

After joining Cambridge United in 2005, he then helped them win promotion to the Blue Square Premier with Kettering Town, who he rejoined after a brief spell at Stevenage.

He then moved to Notts County, with whom he won promotion in 2010 before joining Chesterfield for an undisclosed fee in August 2011, scoring their second goal at Wembley in March to help the Spireites lift the Johnstone's Paint Trophy.

After 10 goals in 53 league appearances for Chesterfield, he was transfer-listed by the League Two Chesterfield in November, only to move up a division by joining the Saddlers on loan.