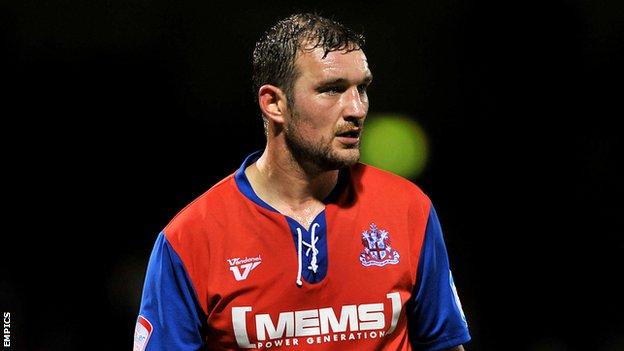 Danny Kedwell says he wants to play the rest of his career with Gillingham.

The striker has scored 26 goals in 73 appearances since joining the League Two side from AFC Wimbledon in 2011.

The 29-year-old told BBC Radio Kent: "I'd love to finish my career here. I have just got to keep doing the best I can for the club.

"You never know what is around the corner or what managers want but it doesn't matter if I go away. I'm a local boy and it's the club I support."

He added: "I will still come back and support them for the rest of my life."

Kedwell was Gillingham's top scorer last season with 14 goals in all competitions and he has bagged 12 already this season, including seven from the penalty spot.

The former Grays man recently ended a nine-game drought - his longest barren spell since moving to Priestfield - with a goal in the defeat to Port Vale last week.

"I know I need to score more from open play but I have been in and out of the team and it is hard to get momentum," he added.

"I went through a bit of a bad patch for a couple of months, not feeling fit and only playing 20 minutes here and there.

"I was top goalscorer last season and I'm top scorer this year, so I must be doing something right.

"I've got to keep thinking to myself to be positive and not be nervous on the pitch."

Kedwell has been a part of manager Martin Allen's rotation policy this season, with nine of his 27 appearances coming from the substitutes' bench.

"We are all in it together and we are not too bothered who plays," Kedwell said.

"We are where we are [in the table] because of what we have done.

"You want to play as much football as you can, especially when you are getting a bit older, but if we are up the top I am not bothered."