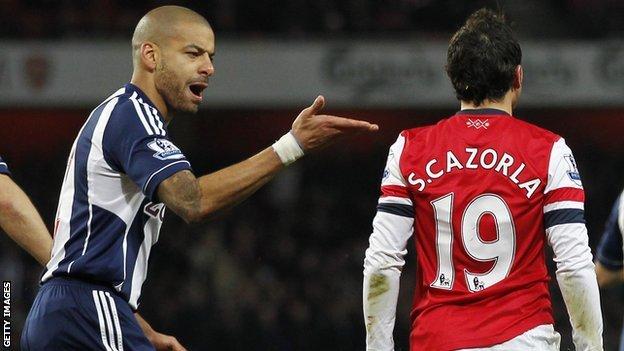 Clarke revealed the 31-year-old fractured his fibula during December's game at the Emirates Stadium, which the Gunners won 2-0.

Reid returned to action as a substitute on Tuesday in the Baggies FA Cup third-round replay defeat by QPR.

"He played for 45 minutes with a broken leg, which shows the character of the boy," Clarke said.

"We didn't release the injury but it was a fractured fibula he got against Arsenal."

Reid joined West Brom in 2010 after a loan spell at the club from Blackburn and signed a new two-and-a-half-year deal at The Hawthorns in April.

The former Millwall player has only made six appearances this season for the Baggies as a hamstring injury kept him out for three months earlier in the campaign.

West Brom did not reveal Reid's injury in the Arsenal game at the time.

However, Clarke was keen to tell of Reid's fracture to dispel suggestions that the Republic of Ireland international is not trying his best to overcome injuries.

"I've put it out there because I want people to see the character of the boy," said Clarke.

"Sometimes people think 'Steven is always injured' but he has an incredible strong mental strength and he wants to play."