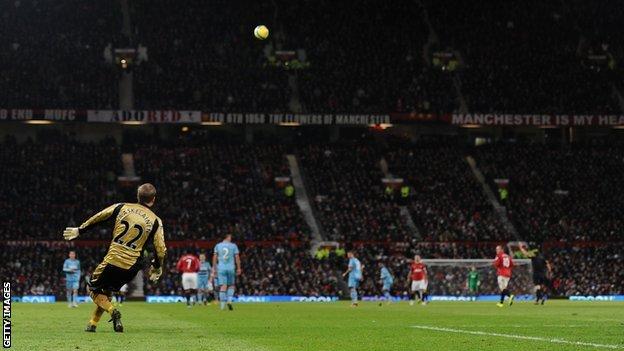 A crowd of 71,081 watched England striker Wayne Rooney score the only goal of the game at Old Trafford, beating the 70,123 which saw Chelsea take on Tottenham Hotspur in 1964.

Manchester United's attendance was just short of the third-round replay record of 73,632 which dates back to Aston Villa against Arsenal at Villa Park in 1931.

Meanwhile, Arsenal registered a crowd of 58,359 in their 1-0 win over Swansea City at the Emirates.

This season's third round enjoyed its best aggregate attendance since 2008, with over 645,000 fans attending games in total.

The third round, which kicked off the FA's 150th anniversary year on 5 January, saw near full houses at both Etihad Stadium and White Hart Lane, while League One's Crawley Town had their biggest ever attendance against Premier League side Reading.

Peterborough United's East Anglian derby with Norwich City was London Road's biggest crowd of the season and non-league giant-killers Macclesfield Town and Luton Town had near capacity support in wins over Cardiff City and Wolves respectively.