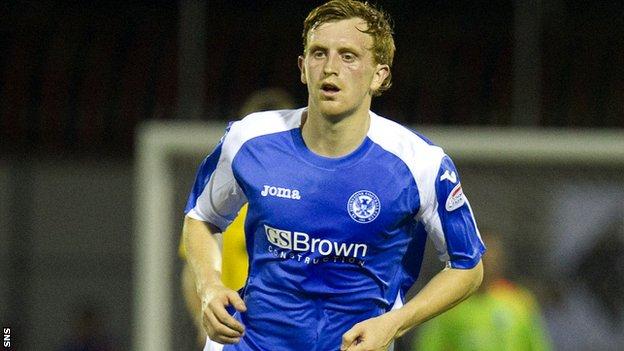 Hibernian have announced a pre-contract arrangement with St Johnstone midfielder Liam Craig, who will move to Easter Road in the summer.

The 26-year-old has made over 150 appearances for the Perth club since joining them from Falkirk in 2008.

St Johnstone had hoped to keep Craig on beyond the end of the season.

"Liam has been a great servant to this club," Lomas told BBC Scotland earlier this month. "He gives nothing but 100% every week.

"But if he decides [to leave] we shake his hand and wish him all the best."

Craig has scored four goals this season, having found the net on seven occasions last term.

On Wednesday, Hibs revealed that striker Leigh Griffiths and defender Ryan McGivern had extended their loan deals until the end of the season.

The Edinburgh team are trying to do the same for midfielder Jorge Claros, who is on loan from Honduran outfit Motagua until 29 January.

But manager Pat Fenlon, who allowed winger Ivan Sproule to move to Ross County last week, will not wait until then for an answer as he bids to retain his current squad size.

"We won't leave it to the last minute. We'll make a decision, if they don't, before that.

"We do have some good options in there if Jorge decides to go or his club decide to take him back.

"There's a lot of work going on and we'd love to keep him to the end of the season, but if it's not to be then we have to look after the club."