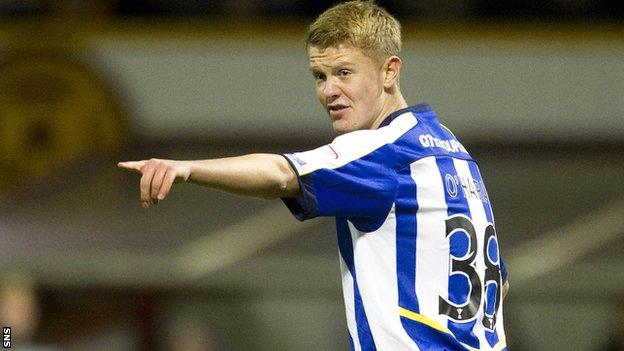 Kilmarnock manager Kenny Shiels expects to turn to youth players to fill the gaps left by the departures of Liam Kelly and Michael Nelson.

And Shiels says he may cut his squad further rather than seek new additions.

"I'm hopeful we can reduce the squad more because it sits with my long term strategy," Shiels told BBC Scotland.

"It means we can get more of these young players in and around the first team. Lots of kids here deserve that chance."

"The kids have moved to a level now where they're as good as quite a lot of the senior pros.

With midfielder Kelly joining Bristol City and defender Nelson leaving for Bradford City, Killie are without two of their first-team regulars for the second half of the season.

"They are a big loss," admitted Shiels.

"You can labour on that and bring negative energy to the club or you can look at it from a positive perspective and see that it's creating some long term options for the development players."

Gary Harkins may be next to leave, with Dundee revealing that agreement has been reached with Kilmarnock to take the midfielder back to Dens Park on loan.

However, the player is stalling as he weighs up his options.

Shiels has be inundated with phone calls from agents offering players but, with the club close to £10m in debt, is unlikely to act on them.

"Agents think there's an opening here and they never stop wringing me," he said. "Believe me there has been some good phone calls about good players.

"But I need to look these kids in the face and says this is the time.

"I've got to provide a pathway for the benefit of those young players which in turn will benefit Kilmarnock who pay my wages.

"And the club needs to benefit from the young players we've worked so hard to educate and bring through.

"We've got to make sure these lads get a chance."