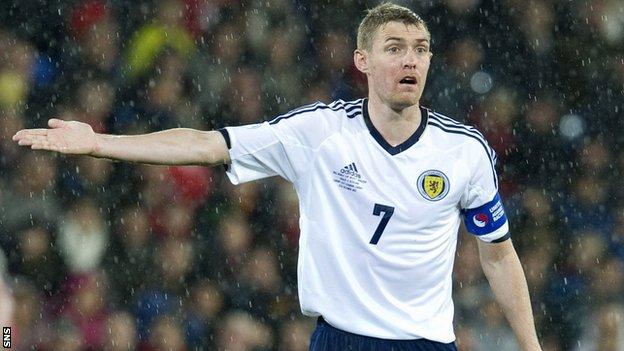 New Scotland manager Gordon Strachan hopes captain Darren Fletcher will "resume his role as a major influence for club and country in his own time".

The 28-year-old Manchester United midfielder will miss the rest of the season following surgery to resolve his chronic bowel disease.

That means he will certainly be sidelined for World Cup qualifiers against Wales, Serbia and Croatia.

Fletcher won his 61st cap in a November friendly against Luxembourg.

Strachan, who has inherited a team bottom of World Cup qualifying Group A, takes charge for the first time in a home friendly with Estonia next month, with the Wales match to follow in March.

I have stressed to him that, as captain, he remains an integral part of the international set-up

The campaign finishes with fixtures against Belgium, Macedonia and Croatia in September and October.

"On behalf of the Scotland supporters, the national squad and backroom team, I wish Darren the best of luck in his recovery from the surgery that has been confirmed by his club," said Strachan is a statement issued by the Scottish FA.

"I spoke with Darren on Tuesday and know that the decision to have the operation has been taken in the interests of his long-term health and with the full backing of the medical staff at Manchester United.

"Darren's commitment and pride in playing for his country is an example to any professional footballer, as has been demonstrated by his availability for the recent World Cup qualifiers and the international challenge match against Luxembourg.

"I'm sure I speak for all Scotland fans when I say I hope that the operation allows Darren to overcome his condition and resume his role as a major influence for club and country in his own time.

"In the meantime, I have stressed to him that, as captain, he remains an integral part of the international set-up and that he is welcome to join up with the squad at any time during his recovery."

Fletcher missed the opening World Cup qualifying draws at home to Serbia and Macedonia but returned after a 10-month lay-off in time to start in the defeats against Wales and Belgium.