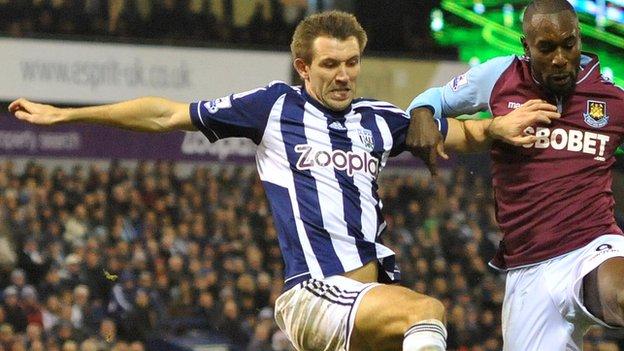 West Bromwich Albion centre-half Gareth McAuley says there is a lot riding for both teams in Saturday's derby with Aston Villa.

The Baggies are seven points off the top four, with Villa stuck in the Premier League relegation zone.

"There's no hiding place, especially in a derby, and hopefully the crowd will pack The Hawthorns out and get behind us from the start," said McAuley.

They've got good young players there. Looking in from the outside, it looks like they are in transition

Albion have won just twice in 11 matches to slip from third to seventh in the Premier League - from surprise Champions League contenders to Europa League outsiders.

And Tuesday night's FA Cup exit, beaten 1-0 at home by QPR in their third-round replay, was another disappointment.

But, with a string of players on their way back from injury, 33-year-old Northern Irishman McAuley insists that the mood in the Baggies' camp remains buoyant.

"We're desperate for a win, for a clean sheet, for anything at the minute - and there's no better time to do it," he told BBC WM.

"We didn't get the rub of the green against QPR on Tuesday but we've got to move on.

"We're expecting a tough game. There is not a lot between a lot of the teams in this division. A lot of the games are tight.

"We saw that against Reading last week. We were leading 2-0, cruising, and then bang. On the pitch, you could not see that coming. This league is so unpredictable.

"But, although we were gutted, we can use those feelings to get ourselves motivated for the derby."

Albion, despite their faltering run of form, go into the game 11 places higher than Villa, who have slipped into the relegation zone in 18th on the back of a untimely run of just one point out of a possible 15 - in which they have shipped 18 goals.

Although Villa have had more than the odd disappointing season over the past decade, finishing 16th under Graham Taylor (2003), David O'Leary (2006) and last season with Alex McLeish, in terms of their points tally, they have not looked so genuinely at risk of the drop since Billy McNeill last took them down to the second tier of English football in 1987.

If Villa went down, that would leave the West Midlands with only one team in the Premier League for only the third time in its 21-year history.

But the mood remains, on the whole, positive at Villa Park, fuelled by the promise that their rebuilt young side have shown under Paul Lambert.

Admittedly, Villa might have one eye on this coming Tuesday night's Capital One Cup semi-final second leg against Bradford City, when they need to overturn a 3-1 first-leg deficit.

But McAuley knows that Lambert's young lions are not to be taken lightly.

"They've got good young players there," he said. "Looking in from the outside, it looks like they are in transition.

"It's a little inconsistent from them, because they've had good games and ones that are not so good.

"But they've brought a lot of young players in and it looks like they are trying to build a team for the future."