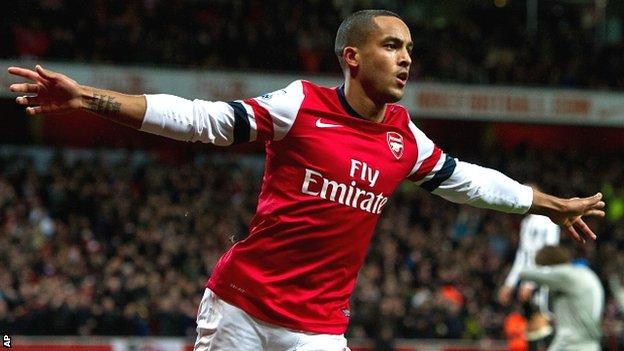 Theo Walcott has signed a new three-and-a-half-year contract with Arsenal, worth £100,000 a week.

The England forward rejected a five-year offer worth £75,000 a week in August and could have left on a free transfer at the end of the season.

Talks stalled after Walcott turned down that proposal but progress was made in the last two weeks.

"What's important now is for the team to realise its potential and win trophies," said Walcott.

"I have made it clear from the start that I wanted to stay at Arsenal so I am pleased we have agreed a deal that everyone is happy with.

"Thanks to everyone for their continued support, especially the manager, everyone at the club and most importantly the fans."

Walcott, Arsenal's top scorer, has also been rewarded with a £3m signing-on bonus.

He signed the deal at the club's London Colney training ground on Friday afternoon, ending months of speculation about his future.

Arsene Wenger spoke of his relief that 23-year-old Walcott has committed his future to Arsenal.

"Theo's contract extension now gives us a strong nucleus of ambitious young players who have committed to the club and want to be successful with us as a group," said the Arsenal manager.

"Theo is a strong player and also a great person, and the combination of his ability and pace always make him such a valuable asset either from the flanks or down the middle.

"He joined us as a 16-year-old and since then has developed very well to become an extremely important player for both Arsenal and England."

Arsenal lawyers and the player's advisors spent all of Thursday in negotiations before agreeing on most issues by 19:00 GMT.

The club had tabled a five-year contract worth a reported £90,000 a week, while Walcott favoured the three-and-a-half-year deal on a salary above £100,000.

But a consensus was reached and the legal formalities - including an agreement on the complex area of image rights - were completed on Friday morning.

Walcott was upset with manager Arsene Wenger's decision to use him mainly as a substitute earlier in the season, but he has since regained a regular starting place.

It marks the end of another protracted contract saga involving the north London club, yet this time they are keeping their player.

Last summer Arsenal lost Robin van Persie to Manchester United as he entered the last year of his deal, and in 2011 they sold Samir Nasri to Manchester City when he was in the same situation.

Mathieu Flamini was in an identical position to Walcott in 2008, and he chose to see out his final six months before joining AC Milan.

Arsenal also saw Cesc Fabregas move to Barcelona following lengthy speculation about his future, although the Spaniard had longer left on his contract.

But Walcott has instead committed his future to the team who signed him from Southampton as a 16-year-old in 2006.

Arsenal rebuffed a bid for him from Manchester City towards the end of the last summer's transfer window, while Liverpool, Chelsea and Manchester United had also expressed an interest.