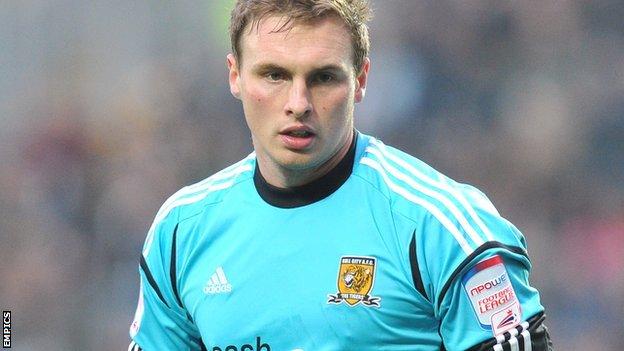 Hull City have signed Fulham goalkeeper David Stockdale on loan until the end of the season.

The 27-year-old played five games for the Tigers earlier this campaign before being recalled by the Cottagers.

Boss Steve Bruce told BBC Radio Humberside: "It is until the end of the season but of course that could change if anything happens to Mark Schwarzer."

Stockdale helped the club to three wins and a draw in his initial spell with the Championship side.

Meanwhile, Bruce has revealed the club are in discussions with QPR over striker DJ Campbell.

The 31-year-old, who scored 10 goals in 17 games for Ipswich during a loan spell earlier this season, has played just once for Harry Redknapp's side during the current campaign.

He said: "We'll have to see what DJ wants to do but it could be with a view to a permanent deal and it's ongoing.

"Ipswich will be trying desperately to get him and I think Crystal Palace are looking at him too."

He added: "I know the boy because I signed him for Birmingham from Brentford a lot of years ago. Maybe he owes me one.

"He's a very talented boy and he was scoring goals in the Premier League a couple of seasons ago. He'll do great if he comes."

Possibly on the way out of the KC Stadium is midfielder Paul McKenna, who is attracting interest from League Two side Fleetwood.

McKenna, 35, has not featured in the league since the 2-1 win over Wolves in November.