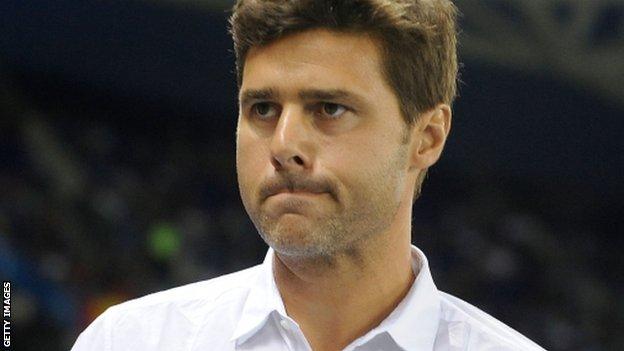 New Southampton manager Mauricio Pochettino says he faces a challenge to win over the club's fans.

The 40-year-old was in a surprise move by Saints.

He will be in charge for Monday's match against Everton at St Mary's where he will get an indication of the feeling amongst supporters.

Pochettino said: "I can't tell them what to feel but I have a lot of respect for how they react."

"If Mauricio Pochettino knew he was walking into Southampton amid a storm of protest from fans upset at the sacking of Nigel Adkins, he certainly didn't show it.

He produced a relaxed and composed display to journalists, many of whom were still trying to piece together how the Argentinian coach came to be sitting in front of them as Southampton's new manager.

The 40-year-old was every inch the new breed of continental coach. He was suited and booted and was quick to mention that he'd spoken to his 'good friend' Jose Mourinho about managing in England.

Every answer, other than a brief hello in English was provided by an interpreter, but Pochettino said communication would be no issue with his players. "Football is an international language," he said.

A huddle of supporters had been ushered away from the stadium as the press conference went on. Many of the squad will be as baffled as them, so Pochettino knows he must win them over if the 'project' he spoke about is to be a long-term one."

Adkins was sacked with the club three points clear of the Premier League relegation zone and on a run of only two defeats in their last 12 league matches.

Speaking through a translator, Pochettino accepted that he might face a backlash given the team's recent performances under Adkins where they most recently came from 2-0 down to draw against Chelsea at Stamford Bridge.

"Fans are free to express their feelings," Pochettino said.

"It is a great challenge to be here as part of this project and (winning) the kindness of the supporters is one of the biggest challenges that I have.

"I am sure they will be supporting the club for the 90 minutes the game will last.

"I hope I can convince them with hard work, honesty and that they enjoy the way the club plays and they feel honoured and proud how the team is playing."

Pochettino told the media that he has done his homework on the Southampton team prior to his arrival at the club.

He said: "I know about the squad because I've been researching them for several weeks.

"They have done really well in the Premier League. In Spain we follow it closely. I am a great admirer of English football and am happy to be here."

Pochettino, who won 20 caps for Argentina as a player, said he had consulted Real Madrid manager Jose Mourinho about moving to England.

He said: "I have seen many games, the Premier League is an attractive league and I have spoken to people at length about it, people such as Jose Mourinho, who is a good friend of mine.

"He told me the best football in the world is being played here."

The former Espanyol manager spoke largely through an interpreter, but did say in English: "I am very happy to be here in this amazing weather. It happened quickly, small details are not important, it's important I'm here at this project and club."