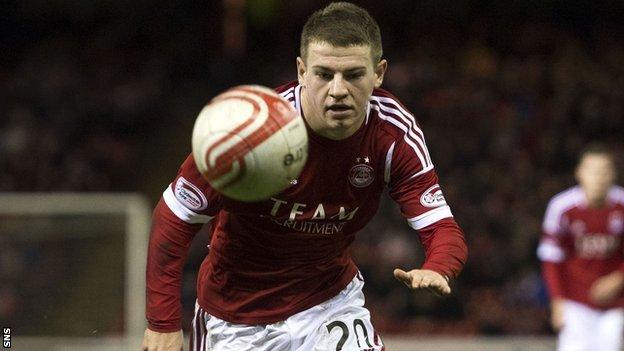 Craig Brown is certain Ryan Fraser will continue to improve at Bournemouth but he regrets being unable to keep the winger at Pittodrie.

"It's a club on the up. It's a good level of football and they are a very ambitious club," said Dons boss Brown.

"I'll not be churlish; I'm sure he will flourish. Unfortunately he is not in the red jersey here."

Fraser's contract at Pittodrie was due to expire at the end of the season, when he could have left for nothing.

Having come through the Dons' youth ranks, he made his debut in 2010 but only became a first-team regular in the first half of this season.

There was a spark about his play that was good

When asked to describe his feelings about the move at Friday's media conference, Brown replied: "My reaction is disappointment that we are losing him.

"He seemed anxious to go and he was advised that his future was elsewhere.

"When that became apparent we resigned ourselves to the fact that we were losing him. We wish him all the best as a young player.

"In spite of the fact that I would have liked to have had him here and that it might have been better for his development here, he has elected to go there and there is not anything you can do about it really.

"When he came on at Dundee United he did get a good response from the fans and I thought he may see that he is welcome here. I thought that might influence him.

"There was a spark about his play that was good. Any young attractive player will be missed.

"[At Aberdeen] we're used to losing players and you've just got to shrug your shoulders."

Brown, who managed Clyde from 1977 until becoming involved in the Scotland set-up in the mid-1980s, spoke of having to cope with the departure of players of the calibre of Steve Archibald, Tommy McQueen, Ian Ferguson and Pat Nevin leaving the Bully Wee.

"I'm used to it over the years. In the early part of my managerial time, I sold players who at that time were better than Ryan Fraser," he said.

Fraser's departure may lead to the return of Peter Pawlett from his loan spell at St Johnstone, but Brown was guarded on that suggestion.

"It would be totally wrong to say we are bringing him back without discussing it with his agent Darren Jackson, his father and [Saints boss] Steve Lomas," added the manager.

"I've spoken to Steve on the phone. I said that after their game against Motherwell we'll have a chat at the start of the week about Peter. I could easily say, 'you're coming back and that's it'.

"But I want the decision to be agreed and have everyone comfortable with it."