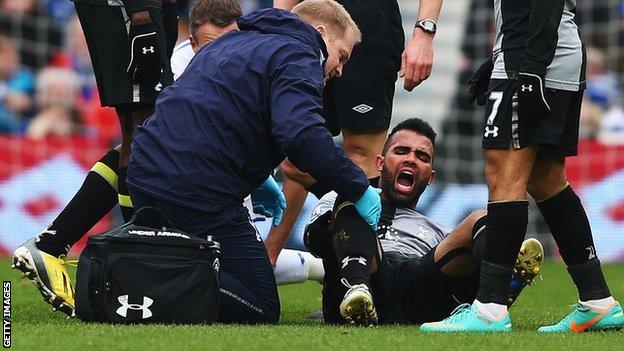 Tottenham midfielder Sandro has been ruled out for the season after undergoing knee surgery.

The 23-year-old Brazil international was substituted in Saturday's 0-0 draw at QPR at Loftus Road, having gone down clutching his right knee.

Sandro used Twitter to post two photos of himself in hospital, and said: "My surgery went well."

He added: "Many thanks to everyone for their support... I'll be fine... to fight again... Come on you Spurs."

Sandro joined Tottenham from Internacional in July 2010 and has scored two goals in 80 appearances for the White Hart Lane club.

He has also won 16 caps for Brazil, helping them to a silver medal at the London 2012 Olympic Games.

Sandro's place in the side is likely to be taken by England international Scott Parker, who has recently returned from an Achilles injury.

Parker, 32, has not started a Premier League game since April, having first suffered the problem towards the end of last season.

He managed to start all of England's games at Euro 2012, but the injury flared up again and forced him to have an operation.

Parker has made six substitute appearances in the Premier League since returning to action in December, and started the 3-0 FA Cup third-round win over Coventry on 5 January.

Tottenham manager Andre Villas-Boas said: "Scott was out at the beginning of the season and he is going to be a major boost for us in midfield.

"Tom Huddlestone showed good levels in the game against Coventry and Jake Livermore was always there threatening, so I think we will be fine."

Sandro's injury is set to put Livermore's proposed loan move to QPR on hold, but Villas-Boas has no plans to sign another midfielder.

"The only thing we have done at the moment is hold on to our midfielders, the ones who are here," Villas-Boas said.

"We have put on hold the movement of Jake's possible loan to another club."