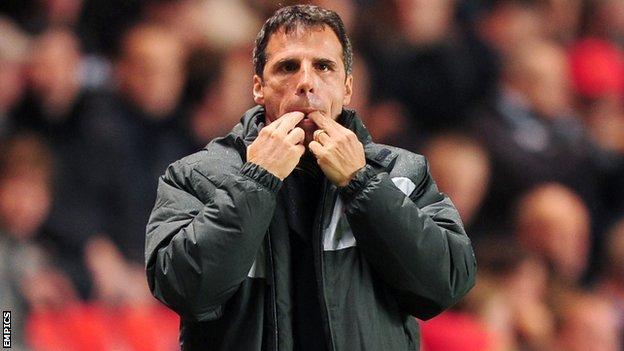 Rafa Benitez is currently in temporary charge of the Blues and reports in the media have suggested Zola is being lined up for a return to the club he scored 80 goals for as a player.

"To be honest I am more focused on what I have to do here," he told BBC Three Counties Radio.

"I know people have been writing things but my mind is completely on this job."

He added: "I want to do well until the end here."

Zola was a popular figure during his seven years at Stamford Bridge, leaving them in 2003 with 80 goals from 312 games and subsequently being voted the club's best-ever player.

The former Italy striker went on to manage West Ham but was sacked at the end of the 2009-10 campaign, despite securing Premier League survival by five points.

He has impressed in his current role at Watford, where he has steered the Hornets into Championship play-off contention against the backdrop of

And with Pep Guardiola, who was choosing to take over at Bayern Munich, Zola has been touted as an option for owner Roman Abramovich, should he not want to retain Benitez beyond his interim spell until the end of the season.

"I was more willing to think Pep was going to England rather than Germany," Zola said of the Spaniard's decision to join the Bundesliga leaders at the end of the season.

"I don't know what the challenge will be like for Pep in Germany. I certainly wish him well.