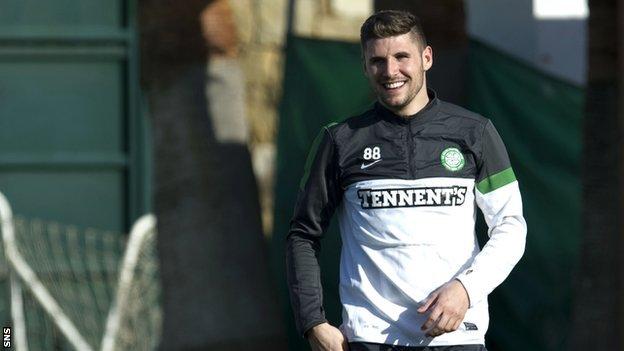 Celtic have rejected an offer, reported to be about £5m, from Norwich for their 24-year-old striker Gary Hooper.

Manager Neil Lennon said: "The bid has been rejected. We had discussions with his representatives this morning and we are waiting to hear back from them."

Having played for a number of lower league clubs in England, Hooper joined Celtic from Scunthorpe in the summer of 2010 and has scored almost 70 goals.

Lennon recently urged him to sign the "very good offer" Celtic had made.

Our case is simple - you are not going

The club is keen to keep the player in Glasgow and the manager hopes that he will sign a new deal to supersede his current one, which expires next summer.

Lennon told reporters at Friday's media conference that he was "very disappointed" that news of the Canaries' bid - "way under" Celtic's valuation of the player - had been leaked.

The Celtic boss admitted he did not know whether Hooper would still be at the club at the end of the January transfer window.

"We are in a good position. We don't want to sell, we feel we have a lot to look forward to in the second half of the season," said the manager.

"We don't want any of our top players to go and Gary comes into that bracket.

"I've not spoken to him because I was with his representatives most of the morning. I'm sure they'll have a discussion later on.

"Our case is simple - you are not going.

"He has a year and a half on his contract and he's a Celtic player."

Hooper began his career at Grays Athletic and moved to Southend in 2006. Loan spells at Leyton Orient and Hereford United followed before he joined Scunthorpe and scored 50 goals in two seasons.

In his first two seasons at Celtic he broke the 50-goal barrier and in the current season he has notched 18 goals.

Norwich manager Chris Hughton would not be drawn on the bid for Hooper but did admit to trying to bolster his striking options.

"Numbers-wise, we're fine as regards the squad," he said.

"The injury situation hit us a bit up front having Grant Holt and Steve Morison out for a period of time.

"Can we add to it? If we are able to add some quality to what we've got we'd gladly do that.

"We are ambitious here. We do want to develop but it has to be in the framework of the club."