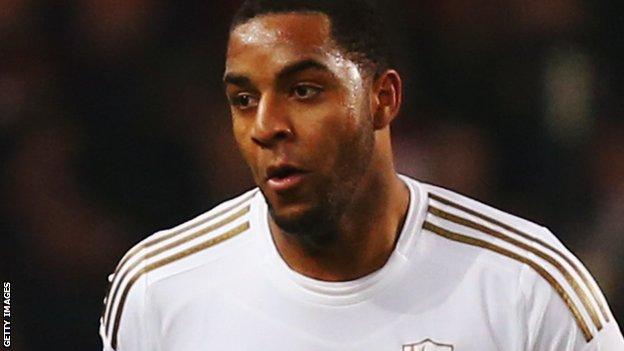 Swansea City midfielder Kemy Agustien is expected to be out for the next four weeks because of an ankle injury.

The 26-year-old Dutchman twisted his ankle during Wednesday's third round FA Cup defeat at Arsenal.

"Four weeks means he will be out for at least our next five games, four in the league and the game on Wednesday (against Chelsea in the League Cup) as well," said manager Michael Laudrup.

Agustien missed almost three months of the season after being in a car crash.

The former Birmingham City player said he was "lucky to be alive" after his car was written off following the accident in the Netherlands in September.

Laudrup added: "It means we are a number down, missing a player who has been participating in the last month and a half and it puts extra work on the rest of the players in the midfield which I have to think about when we are playing every three of four days, so we will have to see.

"I still have plenty of possibilities and [new signing] Roland Lamah has come in so he will be in the 18 tomorrow."

Laudrup revealed that several players had been unable to train on Friday because of the snowfall that had affected most of south Wales.

Swansea are confident Saturday's home match with Stoke City will go ahead, and Laudrup seemed bemused that the snow had caused such disruption.

"I have noticed when I have been in the UK that when it is snowing a lot of things stop, but I hope all the players will be here tomorrow [Saturday] and I am sure we will play the game," said the Dane.

"There were seven or eight players not training today [Friday] but I think we can deal with that."