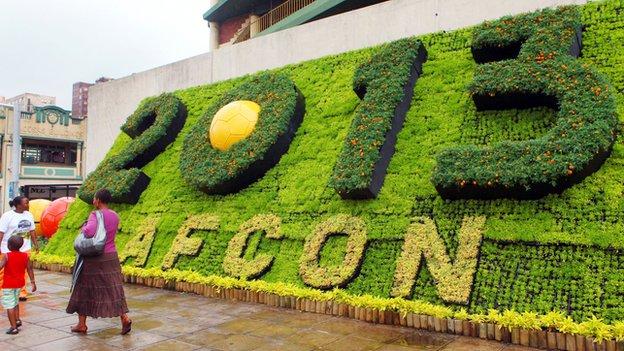 The 2013 Africa Cup of Nations kicks off in South Africa on Saturday with 10 previous winners among the 16 competing countries.

The hosts face Cape Verde Islands at 16:00 GMT before Angola meet Morocco at 19:00 in Group A.

It will be the fifth straight tournament that Ivory Coast arrive as favourites - and the Elephants will be desperate to finally fulfil their promise after losing two of the last four finals in agonising penalty shoot-outs.

Once again, the spotlight will shine on captain Didier Drogba, Africa's most high-profile player but whose missed penalty enabled Zambia to win last year's final and ensured his Nations Cup quest goes on.

The 29th instalment of the tournament kicks off here in Johannesburg on Saturday with South Africa facing first time qualifiers Cape Verde in the National Stadium. There's saturation coverage on the TV, the newspapers are full of it and all the chat in bars, restaurants and online is about what happens over the next three weeks. It is the only story in town. Putting aside the hype, you can't help but be moved by the camaraderie and sense of mission among the competing nations. Training sessions are often ferocious but accompanied by regular outbreaks of singing and dancing from the players. Traditional African heavyweights Egypt, Cameroon and Senegal haven't made it this time. Cape Verde provide the intrigue. This small island nation off the coast of Senegal has a population of just half a million. They are the smallest country to qualify. Elsewhere, there are other big questions that remain unanswered. Can Ivory Coast's "golden generation" led by Didier Drogba finally claim the trophy after so many near misses? Can the holders Zambia retain their title and which Nigeria will turn up? One thing is for sure - it will be as colourful and chaotic as ever.

Benefitting from the decision to play this year's finals just 12 months after the last tournament, because of a change in the event's timing from even to odd years, the 34-year-old knows this is his last chance.

"We have a team capable of great things at the 2013 Nations Cup," said the former Chelsea striker, who now plays in China.

"It would be great to win the trophy now. Honestly, we are getting tired of losing out each time."

Ghana's form indicates they will pose a strong challenge to the Ivorians while defending champions Zambia have returned with the core of their victorious 2012 team as the Chipolopolo aim to retain the title they surprisingly won in emotional circumstances in Gabon last February.

But given the change in scheduling, which was made to avoid Africa's teams contesting the Nations Cup in a World Cup year, Zambia's reign could be the shortest in the long history of the competition.

Herve Renard's side may have failed to impress in their warm-ups but they arrive at the tournament with a better squad than last year, with the addition of FC Utrecht striker Jacob Mulenga (who missed the 2012 finals through injury) and FC Porto defender Emmanuel Mbola.

As for Ghana, they have not won the title in more than 30 years but are still expected to do well despite being a side in transition, having been stripped of many experienced players.

They may be missing Marseille winger Andre Ayew, Kevin-Prince Boateng, Sulley Muntari and Michael Essien, the 2010 World Cup quarter-finalists have an emerging group of promising youngsters that coach Kwesi Appiah hopes to blend with the experience of captain and striker Asamoah Gyan.

Hosts South Africa will hope to emerge from a laboured build-up to ride a wave of home support, like they did in 1996, when the Nations Cup was last held in the country and Bafana Bafana won their only title.

But realistically they are weakened by an under-prepared team and the absence of their best player - and former captain - Steven Pienaar, who recently retired from internationals in order to concentrate on his club career.

It will be interesting to see how they perform when they open the tournament at 1600 GMT on Saturday against debutants Cape Verde, the tiny island nation of just half a million inhabitants who caused a sensation in qualifying.

Largely made up of players from the European leagues, the Blue Sharks knocked out giants Cameroon to book their place at the tournament.

Elsewhere, Mali, who have never won the trophy, are an unknown quantity but the team that finished third last year are another country to have picked a team full of regulars from clubs in Europe's major leagues.

Meanwhile, Tunisia, DR Congo and Ethiopia are past Nations Cup winners but all would deem passage to the knock-out stages as success this time around.

Tunisia's Carthage Eagles - along with fellow North Africans Algeria and Morocco - have been inconsistent in recent tournaments, while Nigeria lack the threat of yesteryear.

However, coach Stephen Keshi's strict approach could get the best out of the Super Eagles and they have gifted individuals in their ranks, including Chelsea pair John Obi Mikel and Victor Moses.

Another Premier League player, Emmanuel Adebayor, will be hoping to put the controversial headlines behind him when he takes to the field for Togo, who pulled out of the 2010 Nations Cup following the attack that killed two members of their delegation on the eve of the finals.

The Tottenham man was included at the last minute, ending his his prolonged and public disagreement with the Togolese federation only after the country's president stepped in to ensure the talismanic striker would be part of the squad.

The stage is set for what promises to be another fascinating feast of football with the smart money on Drogba and company to end years of heartache and finally do justice to their billing as the 'golden generation' - but then, this has been a familiar refrain in recent times.