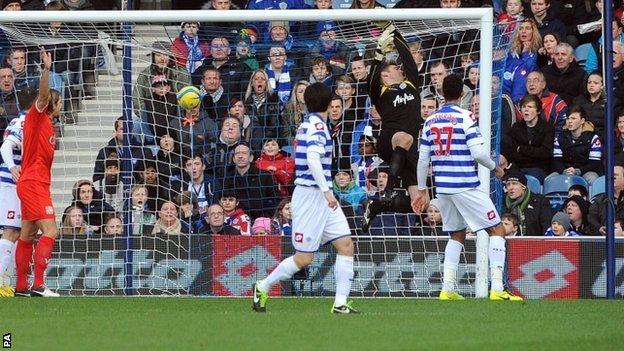 Queens Park Rangers crashed out of the FA Cup after suffering a shock fourth-round defeat by League One MK Dons.

The Premier League hosts went behind when Armand Traore sliced into his own net from a corner after four minutes.

Dons keeper David Martin made several saves but Ryan Lowe latched on to a long pass to double the lead, with Lowe then setting up Ryan Harley.

Darren Potter rifled in to put the Dons out of sight with Jay Bothroyd and Fabio grabbing late QPR goals.

QPR are still at the bottom of the Premier League but they had made an unbeaten start to 2013 before this embarrassing loss.

Manager Harry Redknapp made nine changes to the side that drew 1-1 with West Ham last Saturday, with Tuesday's league game against Manchester City in mind, yet he still included seven internationals in his team.

Queens Park Rangers have not progressed beyond the fourth round of the FA Cup since the 1996-97 season when they lost 2-1 at Wimbledon in the fifth round.

Three of the four goals the home side conceded came courtesy of defensive errors and they paid for wasteful finishing.

DJ Campbell had the ball in the back of the net in the first minute, but it was ruled out for offside and Redknapp's side went 1-0 down from Shaun Williams' corner as Traore mis-cued with Dean Lewington in close company.

The pressure continued from the west Londoners as Fabio, Traore, Campbell and Tal Ben Haim all went close.

But then a long ball from Anthony Kay caught Anton Ferdinand napping and Lowe slotted past keeper Rob Green before the break.

It went from bad to worse five minutes after half-time as Lowe beat the offside trap and pulled back from the by-line for substitute Harley, who could not miss from close range.

Martin palmed over a Alejandro Faurlin header before the Dons amazingly made it 4-0 in the 56th minute, when Potter took advantage of poor defending from a set-piece to smash past Green.

Bobby Zamora's introduction helped stem the tide as he set up Bothroyd's close-range header with Fabio's stoppage-time strike from inside the six-yard box reducing the deficit on an otherwise terrible afternoon for QPR.

"I thought in the first half we played well.

"We gave two diabolical goals away. Terrible, sloppy defending and suddenly you find yourself 2-0 down.

"We came back in the second half and I thought we would still go onto win the game.

"The third goal is offside, to be honest, but that is not an excuse. The fourth goal was another sloppy goal and you can't give sloppy goals way like that and win football matches."

"We felt we could come here and get a result.

"I understand the gulf in teams and I respect that as well.

"QPR is a wonderful football club with one of the best English managers in a long, long time.

"It is nice to make it through. The players were fantastic and I thought they deserved the result.

"Getting into the fourth round was a little bit of history for us and now the fifth round makes it a little more special."