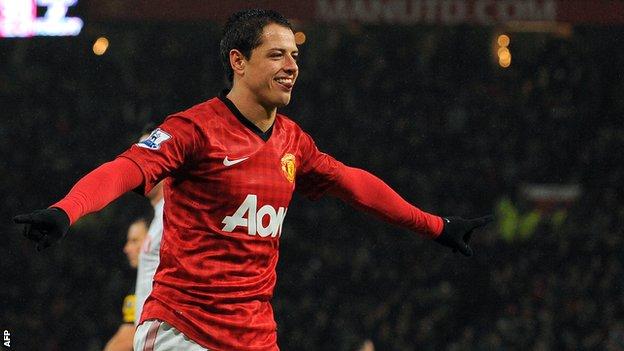 Manchester United swept Fulham aside at Old Trafford to march into the fifth round of the FA Cup.

Javier Hernandez scored twice, while Wayne Rooney and Ryan Giggs each grabbed another as United turned on the style against a Fulham team that were out-fought and out-thought.

Giggs had given United an early lead from the penalty spot but it was three goals in 15 second-half minutes that killed the tie.

Rooney capped a fine display with the goal of the night, surging beyond two Fulham defenders before drilling a fierce shot beyond Fulham goalkeeper Mark Schwarzer.

Hernandez then turned home Rooney's cross and grabbed a second soon after thanks to a fortunate deflection.

Aaron Hughes headed in a late consolation for Fulham but United - inspired by Michael Carrick's quiet authority in midfield, a command performance by Giggs and Rooney's vim and vigour - had been utterly dominant.

Sharper to the ball, swifter to use it, Ferguson's side pulverised the visitors from the off.

Rooney might have scored even before United were awarded a penalty after just 70 seconds. But Giggs made no mistake, firing his shot low beyond Schwarzer, although the Australian goalkeeper did get a hand on the ball as it swept into his bottom right-hand corner.

United should have been out of sight by half-time. That they were not, owed much to the excellence of Schwarzer in the Fulham goal, as he twice denied Rooney during a first half in which he was under almost constant bombardment.

It also owed something to good fortune. Referee Mark Clattenburg was quick to spot Hughes' handball in the penalty box and award United that early penalty from which Giggs scored.

But the official waved away a more clear-cut opportunity to award a second spot kick, when Damien Duff handled Giggs' lofted pass for Nani.

United were producing some typically eloquent attacking moves, surging forward with wave after wave of attack. Nani, Rooney and Anderson all went close but, somehow, Fulham stood firm to reach half-time with United just a goal to the good.

Much had been made of Dimitar Berbatov's return to Old Trafford but, as on many occasions during his time at United, the game simply passed him by. Rooney, however, was full of beans.

Whether breaking past an opponent from wide or erupting with dramatic suddenness through the middle of the Fulham defence, his runs were an exhilarating blend of grace and devastation. He was denied with three minutes of the restart, as Hughes cleared off the line but moments later he got the goal his performance warranted.

The England striker raced on to Anderson's through-ball, turned Brede Hangeland one way, then another before firing a fierce shot beyond Schwarzer and into the net. It was 3-0 moments later and Rooney was involved once more.

Gathering the ball on the right of the penalty area, he drifted away from John Arne Riise and cut the ball back across the penalty area, where Hernandez steered a low shot beyond Schwarzer's despairing dive. The Mexican added a second soon after, thanks to a deflection off Hughes that completed wrong-footed the Fulham goalkeeper.

Fulham did pull a goal back, as Hughes headed in from substitute Giorgos Karagounis's corner with 15 minutes remaining but the damage had been done. Rooney had the ball in the net again late on, only to see it ruled out for a foul by Hernandez. It mattered not, United, in this form, will be the one team they all want to avoid in Sunday's draw.