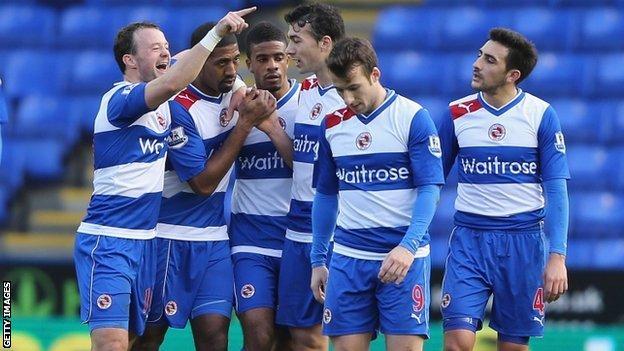 Noel Hunt scored twice as Reading eased into the FA Cup fifth round with a win over League One Sheffield United.

The Royals raced into an early lead when Hunt nodded in from close range before midfielder Mikele Leigertwood made it 2-0 shortly before half-time with a fierce effort from distance.

McCleary scored a fourth with a well taken left-footed strike.

The Premier League side also went close when Adam Le Fondre, who was handed a start following his double at Newcastle last weekend, ran past three players, but saw his pass to Hunt blocked by alert keeper George Long.

The Blades created several chances, although they could not beat Adam Federici in the Reading goal.

Forward Kevin McDonald then tried his luck, but his drilled shot was tipped wide by Federici.

The keeper then needed Stephen Kelly to come to his rescue when he cleared Nick Blackman's shot off the line.

The League One side's best chance fell to Ryan Flynn, who headed wide from eight yards in the last few moments of the game.

"If you look at the results today, a couple of big teams have gone out and we are thankful we are not one of them.

"I don't think we did particularly well in the first half. We just weren't ourselves. I got a bit agitated, which is unusual for me.

"But we were much more clinical and efficient after, so we deserved to go through."

"We take nothing away from the striking prowess of Reading. But the goals we conceded were poor - the first one in particular and the one just after half-time.

"I think the scoreline was a bit flattering but they have taken their chances.

"We had as many chances but just didn't convert them."