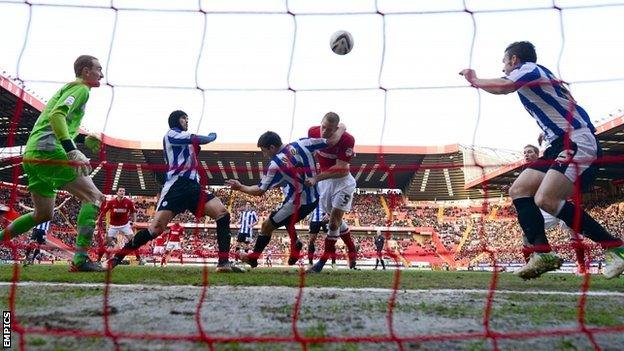 Leroy Lita scored on his debut as Sheffield Wednesday snatched victory at Charlton in the Championship.

Johnnie Jackson's neat finish put Charlton ahead shortly after the break, while Michael Morrison and Scott Wagstaff hit the woodwork.

But Reda Johnson, who missed an open goal in the first half, headed in with six minutes remaining to level matters.

And substitute Lita, who joined on loan from Swansea on Friday, swept home the winner a minute before time.

Happy away days for Owls

The Owls have picked up 13 points out of 15 on the road, since losing to leaders Cardiff on 2 December.

It took a while for either side to create anything of note, with the visitors going closest midway through the half when Anthony Gardner saw a header from Danny Pugh's corner cleared off the line.

Charlton started to come into the game as half-time approached and they were denied by the woodwork shortly before the break when Morrison's effort smashed against the bar.

Sheffield Wednesday should have taken the lead just before the interval when Reda Johnson slid for the ball in front of an open goal but managed to steer it wide from close range.

That miss looked as though it would prove costly as the Addicks took the lead just two minutes into the second half. From a Sheffield Wednesday corner the home side immediately broke down the other end of the pitch and Jackson stroked the ball under Chris Kirkland.

Wednesday introduced Lita soon after and the pacy forward started to make things happen for the visitors.

He forced a fine save out of Charlton keeper Ben Hamer with a curling 25-yard drive, before an angled shot from Jermaine Johnson flew just wide.

The visitors' pressure told with six minutes remaining when Reda Johnson headed over Hamer and into the net.

Lita then completed the turnaround, firing in from Jermaine Johnson's cross to seal victory.

"The turning point was when we hit the post, that would have sealed the deal for us.

"It's a tough way to lose after playing our part in a tough game. We got stronger and better as the game went on and went ahead through a good goal, but then couldn't see the game out.

"It's a bitter pill to swallow but the players have done terrifically well this month."

"It's nice to have a striker on the pitch who can get that scruffy goal. Leroy's done that all his career - and he's scored some good ones as well.

"We defend well but scoring has been a problem. Hopefully one or two will learn by watching him and that's a good education.

"He's been a good player wherever he's been and the one thing he's done is score goals. He knows where the back of the net is."