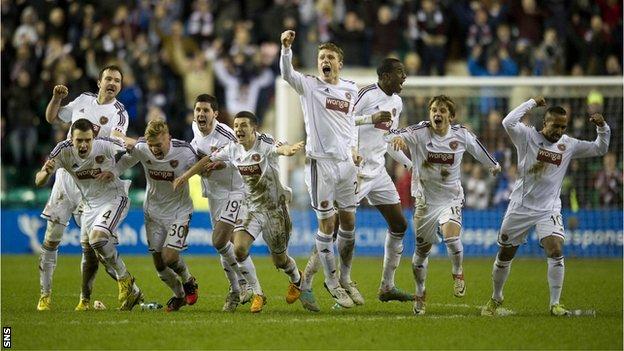 Andrew Shinnie fired Inverness ahead at the start of the second half.

Debutant Michael Ngoo, who was earlier denied by the post, volleyed the leveller before Hearts' Scott Robinson was dismissed for a reckless tackle.

After no scoring in extra-time, Roberts' miss in the shoot-out sent Hearts through.

Last season's Scottish Cup winners will contest the final with the winner of Sunday's other semi-final between Celtic and St Mirren.

Caley Thistle started the brighter, with Billy McKay latching on to a through ball. Hearts keeper Jamie MacDonald raced out rather unconvincingly, but did enough to prevent McKay getting a shot away.

Hearts responded well, with Danny Wilson testing Antonio Reguero in the Caley goal and John McGlynn's side were aggrieved when Jamie Walker went down in the area under a challenge from Graeme Shinnie.

McKay then had a glaring opportunity to give his side the lead. The Hearts defence were completely exposed by Andrew Shinnie's clip over the top, but MacDonald prevailed in the one-on-one, keeping out McKay's tame finish.

The atmosphere inside Easter Road was crackling, and Richie Foran almost gave the Caley Thistle fans cause to celebrate when he peeled off at the back post to meet David Raven's cross, but he could not direct his header on target.

A wonderfully open first period very nearly got the goal it deserved at the other end. Wilson again ventured forward to good effect, sending an inviting ball into the box for Ngoo to attack. The striker rose well to glance a header beyond Reguero, only for the ball to come back off the post.

McKay has been lethal in front of goal this season, but he allowed another good chance to go begging five minutes before half-time. Andrew Shinnie's free-kick found the striker all alone just eight yards out, but he pulled his header wide.

The Hearts fans were infuriated by Foran's hard challenge on Walker, especially given the Caley man's earlier yellow card.

The first half was an even affair, but three minutes into the second period Caley Thistle were in front. Andrew Shinnie ghosted by the Hearts defence and composed himself to drive a shot across MacDonald and into the bottom corner.

Ngoo continued to pose an aerial threat for the Jambos and the Englishman thought he had a good penalty claim, but referee Euan Norris allowed play to continue after the striker's cross appeared to rebound off Ross Draper's arm.

Norris turned down another spot-kick appeal when Jason Holt tumbled at the feet of several Thistle defenders after a galloping run down the right flank.

Ngoo was using his considerable physical presence to good effect and, on 65 minutes, he hauled his side level. A Hearts free-kick caused Inverness problems and Danny Wilson nodded the ball back across goal where Ngoo was lurking to smash home a thunderous volley.

Just when Hearts were in the ascendency, the match turned on its head when Robinson left the ground with a lunge on Owain Tudor Jones. Referee Norris wasted no time in issuing a red card.

A sending off was always a strong possibility in such a feisty encounter with the stakes so high, but Caley could not make their numerical advantage count in regulation time.

David Raven had a fortunate escape in the first period of extra-time when he was bullied out of a ball he was favourite for by Arvydas Novikovas. The defender's luck was in when the substitute's effort deflected off his back and behind for a corner.

Caley fashioned the game's best chance just before the turnaround. Hearts' suspect offside trap was sprung yet again, with Shane Sutherland and McKay left bearing down on MacDonald.

Sutherland drew the keeper before rolling the ball across to McKay, who had the open goal at his mercy. The striker took an unnecessary touch however, and as the defence recovered he could only feed Shinnie, whose shot was well saved by MacDonald.

Shinnie had another glaring chance to win the match in the second period of extra-time, his toe-poke from a Josh Meekings' flick creeping inches over the crossbar.

And with that, the last chance of open play was gone and it was down to the Russian roulette of penalty kicks.

As always with the 12-yard decider, there has to be a villain and, on this occasion, it was Roberts. Unnerved by the nine successful spot-kicks that had gone before, he blasted his penalty high into the despairing Caley Thistle fans.

The Hearts supporters exploded in jubilation, with the Highlanders left to wonder if they will ever have a better chance to claim a major trophy.