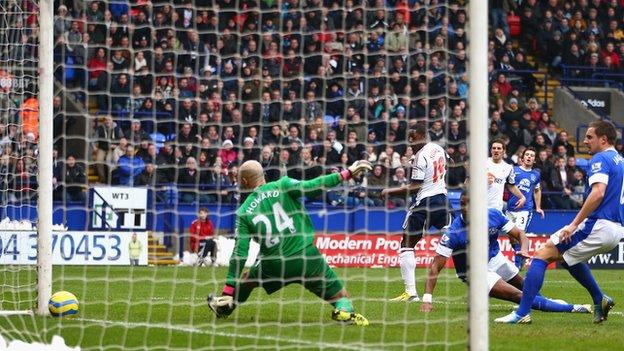 Johnny Heitinga's injury-time goal enabled Everton to overcome battling Bolton and book a place in the fifth round of the FA Cup.

Both sides have a great FA Cup pedigree with Everton lifting the trophy five times, while Bolton have won the competition on four occasions.

Wanderers first triumphed 90 years ago in the first Wembley final in 1923 with their last FA Cup success coming in 1957-58, although they did reach the semi-finals two seasons ago but lost 5-0 against Stoke.

Everton, who last won the cup in 1995, scored inside 25 seconds in the 2008-09 final but eventually lost 2-1 against Chelsea, the eighth time the Toffees had finished runners-up.

Both sides had chances to go ahead before Heitinga fired past Lonergan from 12 yards to seal a dramatic win.

The late goal was harsh on the hosts who had deserved a replay at Goodison Park, but Heitinga, a substitute for the ineffective Nikica Jelavic, took his side into the last 16.

David Moyes has been Everton manager since March 2002 and this was his 500th game in charge of the Toffees.

However, he has yet to win a trophy, although his side were losing finalists in 2009 when they were beaten by Chelsea. But Moyes showed his intention to try and win this competition with a full-strength team and a three-pronged attack of Jelavic, Victor Anichebe and Kevin Mirallas.

Everton, five-time winners of the FA Cup, took a fortunate lead in the 18th minute. The ball was played into Anichebe, who mis-hit his shot but the ball bounced off Pienaar's chest and past Lonergan.

Bolton, who beat Premier League side Sunderland in the last round, equalised nine minutes later when Pratley got to the byline and Sordell converted at the near post.

Sordell grabbed both goals in the Trotters' 2-0 FA Cup third-round replay win against the Black Cats and should have scored his second of the afternoon, but was denied by a one-handed save by Tim Howard.

The Everton goalkeeper, who scored with a 90-yard clearance when the sides last met, was again called into action when he had to push away Marcos Alonso's powerful effort.

Anichebe should have given the Toffees a half-time lead when he was picked out by substitute Magaye Gueye, on for the injured Mirallas, but headed wide from 10 yards.

Everton had the first chance of the second half when Leighton Baines's cross was headed wide by Gueye.

But Bolton then enjoyed a good spell of possession, although Pratley wasted a free-kick in a dangerous area, before Howard again denied the impressive Alonso, diving full-length to save another well-struck shot.

Pienaar tried to curl an effort into the bottom corner from the edge of the penalty area, but was denied by a fingertip save by Lonergan.

But there was late drama as Heitinga collected a loose ball after Bolton failed to clear a ball into the box and the defender fired past Lonergan for the winning goal.

Bolton Wanderers manager Dougie Freedman: "Many times in similar conditions we could have called that off but everyone has worked so hard to get the game on and it seems like the game has kicked us in the teeth.

"I'm disappointed in the result, but not the performance.

"In the first 20 minutes we had a setback but we got on with it and played probably the best football we have done since I've been here.

"We pushed for the winner but if you do not concentrate for 95 minutes against a Premier League side then you're going to get punished."

Everton manager David Moyes: "It was great to get through, that's the job, but there has been many years when we've not got through in similar games.

"I thought it was going to a replay and Bolton had done enough to earn it. In the second half we had most of the play without being creative and we needed to find another way of scoring the goal.

"Marouane Fellaini had been playing a bit deeper so I thought he needed to be pushed forward. He didn't score but he was involved.

On Nikica Jelavic's form of only two goals in 14 games: "I wanted to give him every opportunity to get it right and I want to show him that I trust him to score goals."