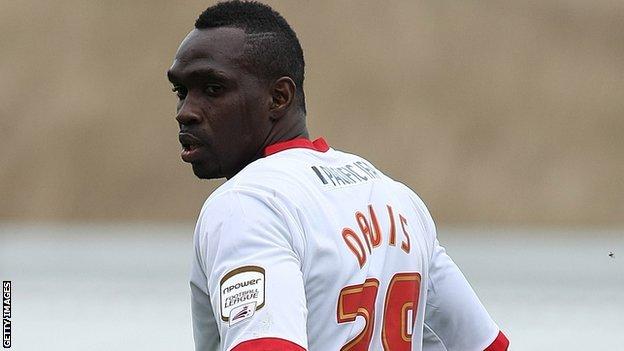 Claude Davis was sent off on his Rotherham debut as Bristol Rovers secured a convincing win to lift them off the bottom of the League Two table.

It was Davis who bundled over Ryan Brunt to earn Rovers a penalty, which was converted by midfielder Lee Brown.

The defender then received a second yellow card just before half-time.

It was a memorable first senior goal for 18-year-old Harrison, who came through Rovers' academy set-up.

He had only been on the pitch for two minutes, having come on as a substitute for Eliot Richards, when he picked up the ball on the half-way line, weaved through the Millers' defence and fired a fierce right-footed shot past Andy Warrington.

Forward Anyinsah had been out of favour under former Rovers boss Mark McGhee but has rediscovered his form since John Ward's return - his powerful low effort into the bottom-left corner was his second goal in three games.

Noble gave Ward's side a scare when he drilled in just two minutes after arriving on the field, but Rovers settled their nerves and claimed a valuable three points.

"We had to get through the first 20 minutes without a dent, and we did that pretty well.

"We scored two great goals and and showed a bit of quality.

"We had a discipline about the team and they responded very well.

"I think if you make individual errors like that then you're going to lose football matches.

"I don't think there is a manager or coaching staff in the the country that can legislate for the three errors that gave Bristol Rovers three goals.

"We lacked energy, a spark, a passion but we still dominated the ball.