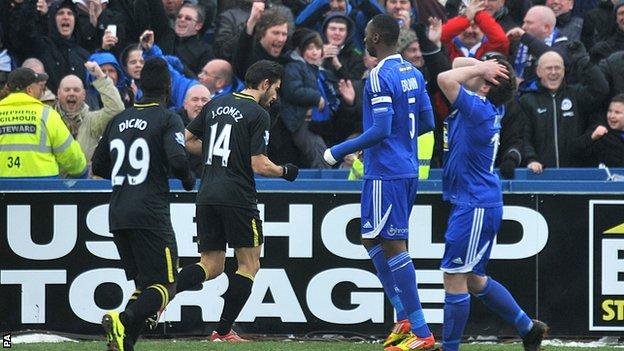 Wigan survived a stern test from non-league Macclesfield to reach the fifth-round of the FA Cup for only the second time in their history.

The Latics had to hang on for long spells against the lowest-ranked club left in the competition after taking the lead through a sixth-minute Jordi Gomez penalty but did enough to avoid the upset that many had predicted.

Macclesfield had already knocked out Championship leaders Cardiff and League One high-flyers Swindon to reach this stage for the first time in their 139-year history and Wigan boss Roberto Martinez picked a weakened team that saw eight changes from their last Premier League game - a 3-2 home defeat by Sunderland.

But the home fans who had helped clear the Moss Rose pitch of snow on Saturday morning saw the Blue Square Bet Premier side get off to the worst possible start, with referee Roger East awarding Wigan a penalty after just six minutes.

There was no doubt about the decision, either. Thierry Audel timed his challenge all wrong as he tried to stop Callum McManaman in his tracks, and ended up sending him cartwheeling to the ground.

Goalkeeper Joe Anyon's first touch as a Macclesfield player after joining on an emergency loan on Friday was to get a hand to Gomez's spot-kick, but he could not keep it out.

The Silkmen responded well to that early set-back, however, and although 83 places separate the side in the league pyramid, Wigan never looked entirely comfortable with their lead.

Macclesfield soon settled down to play the sort of neat passing football that is not too different from the Latics' own brand, and chances duly followed.

Wigan were still threatening on the break, with McManaman a constant menace, but he fired wide when Anyon's punch landed at his feet on the edge of the area,

And the home side should have been level before half-time when Audel missed an opportunity to redeem himself for his early error.

The Silkmen, who had a penalty appeal turned down when Fairhurst was bundled over in the box, saw the French defender rise to meet the corner they were awarded instead, only to head straight at Joel from six yards out.

Wigan had an opportunity to give themselves some much-needed breathing space when Nouha Dicko ran through at the start of the second half but he fired straight at Anyon.

And they were made to fight hard to defend their narrow lead as Steve King's Macclesfield continued to push them back with their enterprising attacking play.

A stand-out chance to compare with the one that Audel wasted earlier never materialised, however, and the home side's clearest sight of goal saw Keiran Murtagh get the ball stuck under his feet as he shaped to shoot from a Matthew Barnes-Homer cross.

There was another big shout for a home penalty turned down when Ryan Jackson's cross appeared to strike a Wigan hand in the box but referee East turned down the appeal after consulting his linesman, Richard West.

And the Latics held out, despite some sustained late pressure, to book their place in round five for the first time since 1987.