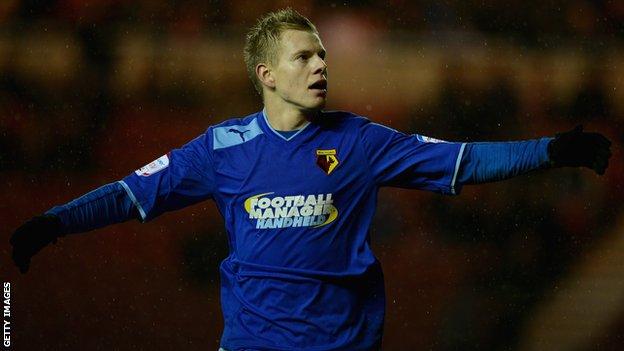 Prolific striker Matej Vydra scored twice as Watford moved up to fourth in the Championship with a comfortable victory at Nottingham Forest.

The Czech Republic international opened the scoring after connecting with Troy Deeney's pass across the face of goal.

Vydra returned the compliment by teeing up Deeney to double the lead.

Dexter Blackstock missed a chance to reduce the deficit from point-blank range before Vydra completed a fine win with a composed finish.

Vydra, on loan from Udinese, now has 18 Championship goals, including six in his last three appearances, since arriving at the end of July.

Matej Vydra, 20, has scored four goals in two league games against Nottingham Forest to take his tally to 10 in his last seven league and cup appearances.

While Watford have won five of their last six league games to move to within one point of second spot in the table, Forest continue to frustrate under Alex McLeish.

They have won once in six league and cup games since the former Scotland manager took charge at the City Ground last month.

There was little doubt about the outcome once Vydra broke the deadlock in the 20th minute.

Nathaniel Chalobah picked out Deeney and he steered it across the face of goal for Vydra to apply the finish.

It was 2-0 in the 34th minute, Vydra feeding Deeney to rifle home.

Forest finally came to life but Blackstock, who signed a new contract on Thursday, somehow missed from point-blank range on the stroke of half-time.

Vydra sealed the points 18 minutes from time after lifting the ball over keeper Karl Darlow.

"I am not surprised that other clubs are supposed to be interested in Matej Vydra because he is a fine player with a great attitude.

"But he wants to keep on learning and I think he feels he is with the best club to do that at this stage of his career. We know that we can work with him and help him improve.

"We are fortunate that we have a very good partnership up front in Matej and Troy Deeney. They combine so well together and have not only produced a supply of goals but work very hard for the team.

"You could see how their link-up play worked today but as well they will point to their success as a reflection of the work that the team is doing as a unit."

"We were devoid of any ideas and legs and it was one of the worst defensive performances I've seen - it was a 'brain dead' performance.

"There needs to be a vast improvement because we won't get to the play-offs with displays like that. I didn't think Watford were extra special - just that we were very poor on the day.

"We also need some help in terms of bringing players in. We missed out on a player this week, which was disappointing, but it's clear that we need to strengthen.

"The play-off places are not out of the question but there is no doubt we have to up the ante and give this crowd something to cheer about."