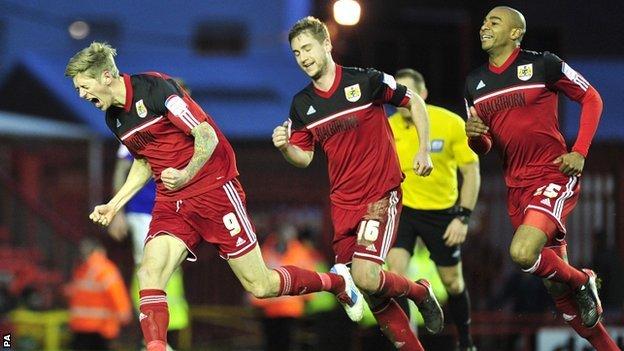 The visitors led through Daryl Murphy's first-half strike when he coolly slotted home after 30 minutes.

But after the break substitute Steven Davies levelled from a tight angle.

Davies then played his part in the winner as he nodded Brendan Moloney's cross into the path of Stead who earned City's first win of 2013.

It was a crucial victory for the Championship's bottom club, who are still seven points from safety, while Ipswich slip to fourth from bottom.

Bristol City came into this match without a goal since New Year's Day but their chances of ending that barren spell were boosted by the return of top scorer Sam Baldock.

He had the first real chance of a quiet opening to the match when his 21st-minute volley was deflected inches wide by Tommy Smith.

At the other end David McGoldrick fired wide before he set up the recalled Murphy to fire home his sixth of the season.

City, who have conceded more goals on home soil than any other team in the division, then came close to letting in their 35th of the campaign eight minutes before the break but Lee Martin missed the target from six yards after being found by McGoldrick's cross.

But their breakthrough came after the interval when Louis Carey's raking ball picked out Paul Anderson and the former Liverpool winger's reverse pass found Davies for a clever finish.

Ipswich were stung into action by that and Murphy could have scored his second of the afternoon three minutes later but he nodded over the bar from inside the six-yard box.

Bristol City keeper Tom Heaton made a big double save with six minutes to go to deny Aaron Cresswell and then Martin as he looked certain to score.

And just when it looked like the sides would have to settle for a point, Stead struck to give former Forest boss O'Driscoll a platform to build on as his team search for Championship survival.

"We had to weather a storm, but I thought the players showed tremendous character to stay in the game.

"It was so important to get a home win on the board after the lads had been beaten 4-0 by Leicester last time they played here.

"I missed the equalising goal because I was shouting at my midfield players to take up better positions following a tactical change at half time.

"It's one step in the right direction, but we know we have to do even better to survive in the Championship."

"I'm angry, livid and totally devastated. One long ball has taken out three of our defenders for the winner and that simply shouldn't happen. It was a dreadful goal to concede.

"We had a great chance to go 2-0 up in the first half and opportunities to win the game near the end. I should be happy because we played well for long periods.

"But that means nothing. We should not have lost and my weekend will have a black cloud hanging over it."