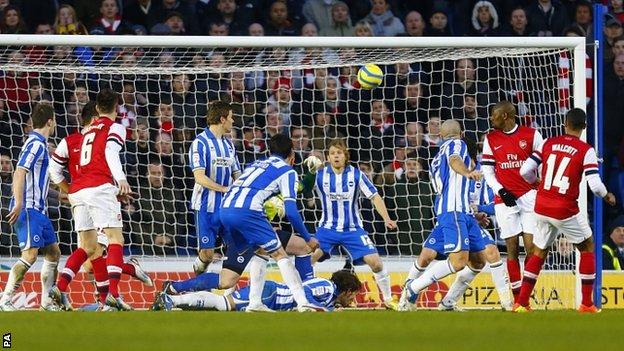 Theo Walcott's deflected late winner settled a pulsating encounter and sent Arsenal into the FA Cup fifth round at the expense of battling Brighton.

Gus Poyet's Championship side demonstrated exactly why they are play-off contenders as they pushed Arsenal every inch of the way before finally being beaten by substitute Walcott's strike five minutes from time.

Arsenal led twice through Olivier Giroud but in a thunderous atmosphere Brighton bounced back and looked to have secured at least a replay with goals from Ashley Barnes and £2m Argentine striker Leonardo Ulloa on his debut.

Arsene Wenger sent on Walcott and Jack Wilshere in the second half to give Arsenal extra thrust and control.

This was the toughest of examinations for Arsenal - who are seeking their first trophy in eight years - and Wenger's delight at the final whistle was clear evidence of his relief and pleasure at negotiating it safely.

Brighton celebrate the 30th anniversary of reaching the FA Cup final against Manchester United - which they lost after a replay - this year and the old competition certainly stirred the emotions as the stadium crackled with noise and fervour throughout.

Arsenal's visit drew a record crowd to The Amex - but they did not see Wilshere, Walcott and Santi Cazorla from the start as they were left on the bench.

Brighton have proved in the past they are undaunted by visitors from the Premier League. And so it proved again as they created the first clear opening, only for Barnes to miscue his volley and allow Wojciech Szczesny to save.

It was punished instantly as Arsenal swept to the other end to take the lead after 16 minutes, Giroud measuring a perfect left-foot finish high past Ankergren from 20 yards.

To Brighton's credit, they were not knocked out of their stride by the goal and applied pressure to Arsenal's struggling left-back Andre Santos as he battled to contain the lively Will Buckley.

Brighton, who had replaced injured captain Gordon Greer with Gary Dicker, drew level after 33 minutes as Barnes made amends for his earlier miss by beating Szczesny to David Lopez's cross to head in.

It was no more than they deserved, although they suffered another injury blow as the influential Buckley was replaced by Kazenga LuaLua at the start of the second half.

Arsenal opened with greater intent after the restart, with Lukas Podolski striking the bar from a free-kick, but it proved to be a temporary reprieve as the dangerous Giroud showed held off Adam El-Abd to sweep a finish past Ankergren from close range after 56 minutes.

In a thrilling game, Brighton once more showed their strength of character to draw level six minutes later. Arsenal's slack defending left manager Wenger infuriated on the sidelines as Ulloa stooped to send a diving header past Szczesny from Barnes's cross.

Wenger decided it was time to send on Wilshere and Walcott for Alex Oxlade-Chamberlain and Tomas Rosicky but it was Giroud who remained the danger man. He had already forced an important block from Ankergren then volleyed into the ground and just over as the game entered the final phase.

The decisive moment came when Ankergren's punch landed at the feet of Walcott on the edge of the area and his volley glanced off El-Abd into the net in front of Arsenal's ecstatic travelling support.