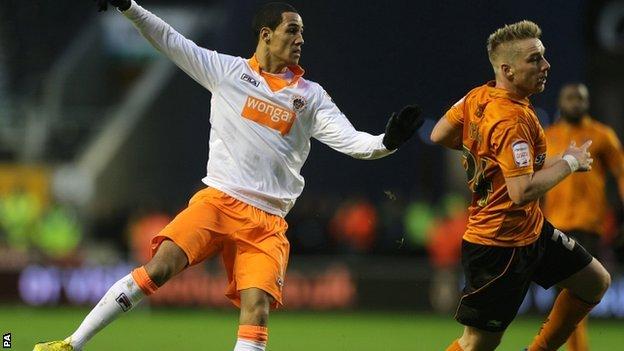 Sylvan Ebanks-Blake headed the home side into a deserved lead but Ince capitalised on an error by Wolves's Roger Johnson to level matters.

After Ebanks-Blake spurned a glorious chance, Ince then scored a 25-yard piledriver 12 minutes from time.

Johnson concluded a miserable afternoon by collecting an injury-time red card after tangling with Angel Martinez.

The victory for the managerless Seasiders ended a run of six Championship matches without a win while Wolves drop to 18th in the table, four places below Blackpool.

Ebanks-Blake's 15th-minute opener was reward for making the majority of the early running, as Slawomir Peszko found the overlapping Ronald Zubar on right-flank with a beautifully-weighted pass and the full-back's first-time cross was clinically converted by the Wolves striker for his 11th goal of the campaign.

The visitors struggled to produce any sustained spells of pressure by way of a response, Ince's deflected long-range effort the closest they came inside the opening half-hour.

And Wolves almost extended their advantage when Bakary Sako swung a free-kick into the box from distance but Kevin Doyle headed against the top of the crossbar.

Soon after Johnson's calamity led to the visitors drawing level. The centre-back attempted to shepherd the ball back to keeper Carl Ikeme but there was not enough pace on it and Ince reacted quickest, stealing between them and slotting home from an acute angle.

Blackpool's Matt Gilks saved superbly with his feet to deny Ebanks-Blake from close range leaving Ince, who has been a reported transfer target for Liverpool, to grab victory with a moment of magic.

His fierce, swerving effort could only be touched onto the post by Ikeme before it nestled in the back of the net for his 15th of the season.

"It is not going to do me any harm to get results.

"I have always said that if it is me, fantastic. If it is not I will just hold the fort until somebody else comes in here.

"But whoever gets it has got a special bunch of players there. Karl [Oyston, Blackpool's chairman] knows the situation at the moment and it is in his court.

"I will probably learn more from that than if we had won 2-1.

"I have got to put things right and I will give the players a chance to do it themselves and if not I have to replace them as there are lots of little mistakes going on out there that I can see.

"If we had won 3-0, you end up not realising what has been wrong for two or three years.

"But we have got to get away from the bottom. We have to get a couple of wins."