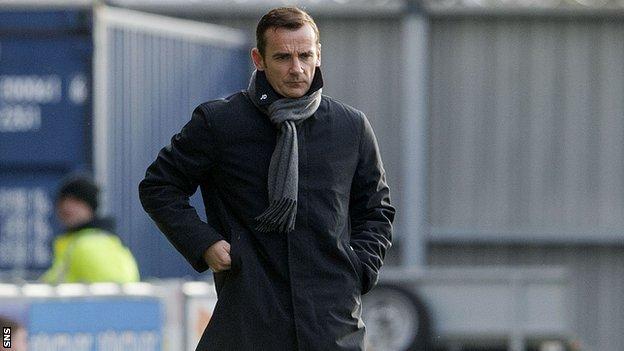 St Mirren manager Danny Lennon described his side's performance against Ross County as one of the worst he's seen.

"It hurts me today to say that's one of the worst I've seen," said Lennon.

"I really, really feel for every supporter we had in here today because that isn't the standard we set at this football club."

He added: "I'm raving about the fantastic form, the commitment, the effort, the desire and the work-rate that's been the key recipe to our success leading into this game.

"Today it hurts me inside to say Ross County looked much hungrier than what we did right throughout the game."

A terrific free-kick from Richard Brittain gave County a half-time lead, but Steven Thompson equalised for St Mirren shortly after the break.

However, defensive mistakes allowed Sam Morrow to restore the Dingwall side's lead before Ivan Sproule got a double on his debut.

"We got ourselves back into the game with a fantastic goal, really picking up the momentum and looking the more likely at that given time," Lennon told BBC Scotland.

"We then shoot ourselves in the foot and give away a sloppy goal and that killed our momentum, and that is a mentality and a weakness and a character that you never, ever want to see in your side.

"The quality of the goals we lost today, apart from the free-kick, is alarming.

"The SPL, where it's a demanding league, you've got to keep your concentration levels high throughout the game and you can't for one second drop that standard.

"As you see, we've been punished very heavily for that today. It hurts me to say that my team's been out-fought today."

Lennon still hopes to add to his squad ahead of the transfer window closing.

He has been running the rule over Polish striker Patryk Mikita in training over the past week.

"We're certainly looking for something else up top that can give us another dimension," said Lennon.

"We're waiting to see if we're going to get Paul Dummett back from Newcastle, so that's out of our hands at the moment."