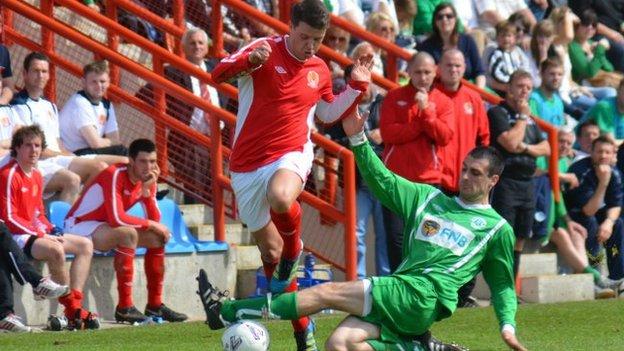 The match at Springfield Stadium is set for Saturday 9 February and will follow a Rovers training camp in the island.

Jersey will use the fixture as part of preparations for the

Hopefully it can be a good spectacle for everyone

The Irish side are managed by Ian Baraclough, a former player with Jersey side St Ouen.

He led Sligo Rovers to their first Premier Division title in 35 years, taking them into the Champions League qualifiers.

"It's great for us, we'll be three weeks into pre-season," Baraclough told BBC Radio Jersey.

"The Jersey trip will help bind the lads together, integrate the new players that we're bringing in and the new members of staff.

"Hopefully it can be a good spectacle for everyone."

For Jersey, the game will be their first competitive match since a side representing the local league system

Jersey's footballers pulled out of the 2013 Island Games for financial reasons, instead insisting they would play monthly fixtures against UK or French clubs.

They have struggled though to attract teams to the island for fixtures, and the game against Sligo Rovers is the first for the island side to be staged in Jersey this season.

"It's going to be a massive challenge and it's a good standard of opposition.

"It just gives the boys a little incentive when they're training that they've got a game to come at the end of it.

"It's a bonus leading up to what is a massive tournament in San Marino."