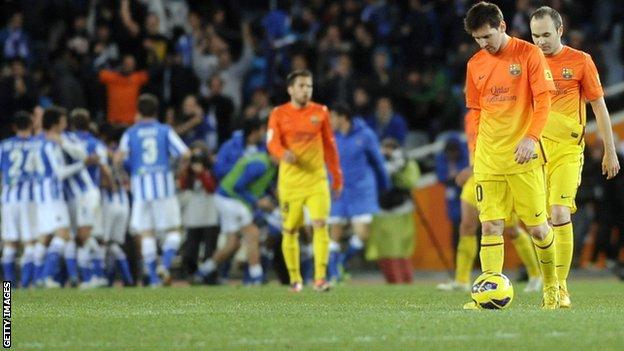 Barcelona lost in La Liga for the first time this season, falling to a shock 3-2 defeat at mid-table Real Sociedad.

Goals from Lionel Messi and Pedro put the Catalan side 2-0 up at half-time.

But Uruguayan winger Gonzalo Castro scored twice for the hosts, either side of a red card for Barca's ex-Manchester United defender Gerard Pique.

And Tito Vilanova's men were left without even a point when Imanol Agirretxe poked in from close range in injury time.

"We've missed a match that seemed to be on track. We need to keep working to try to make a good 2nd round."

Barcelona have started the season in record-breaking fashion, accumulating 55 points from a possible 57, their only dropped points a draw against Jose Mourinho's Real Madrid.

And, even in defeat, Ballon d'Or winner Messi closed in on yet another goalscoring milestone, having now found the net in 10 consecutive La Liga matches to tie the record held by former Brazilian striker Ronaldo, who accomplished the feat with Barcelona in the 1996-97 season.

It looked as though the league leaders were set for another routine victory, Messi firing home after being found by Andres Iniesta and Spain international Pedro - who also hit the post - doubling the advantage when he tucked in from Dani Alves's cross.

But Sociedad got back into the game through Castro's strike from the left side of the area and, after Pique collected a second yellow card, Castro got his second via a deflection off Javier Mascherano.

And the turnaround was complete late on as Agirretxe slid in to grab the winner, meaning Sociedad join Real Madrid in the Spanish Super Cup and Celtic in the Champions League as the only teams to beat Barca this season.