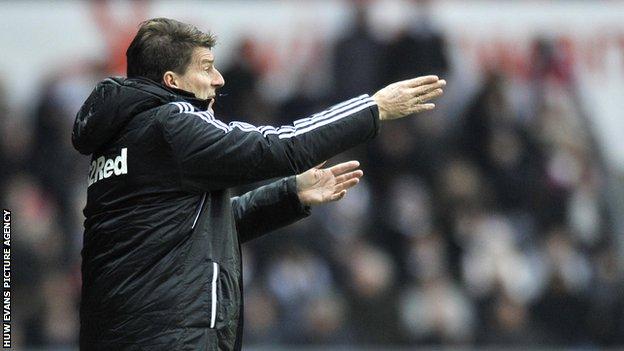 Swansea boss Michael Laudrup says their 3-1 win over Stoke was the perfect preparation for their midweek Capital One Cup semi-final tie with Chelsea.

They hold a two-goal lead over Chelsea going into Wednesday's second leg.

Two goals from Jonathan de Guzman and one from Ben Davies helped them down the Potters on Saturday.

"I'm pleased with the result [because] we all know we have that semi-final second leg against Chelsea on Wednesday," he said.

"Winning is always the perfect preparation, winning and no injuries. I think it was a very good performance, we dominated from the first minute."

Swansea are now just seven points off reaching the 40-point mark in the Premier League following victory over Stoke.

Laudrup, who succeeded Brendan Rodgers as manager during the summer, is pleased with his side's progress in his first season in charge.

"When I came here and started I didn't think that we'd be on 33 points already now," Laudrup added.

"But we are and obviously I'm very pleased. We just have to continue."

The Swansea manager had no further news on striker Danny Graham, a target for Norwich City and Sunderland.

Laudrup had confirmed prior to the Stoke game that the club had received offers for the 27-year-old former Watford player.

"I don't know," he said when asked if Graham's future was away from Swansea.

"I can't really answer that question and I don't even know if Danny can. We have to see what happens."

Graham came onto the field as a second-half substitute, as did Stoke striker Kenwyne Jones.

Jones has been linked with a move to the Liberty Stadium but Laudrup did not want to comment on the speculation.

"Nothing's certain [so] I think it's better not to comment," said the former Real Madrid and Barcelona player.

"We're trying to do things as quickly and as secretly as possible here at this club because we we cannot compete with a lot of the other clubs.

"We've seen players in other clubs recently where it was nearly 100% that a player was going there and then suddenly he shows off with another shirt.

"Until all the contracts are signed, you never know."