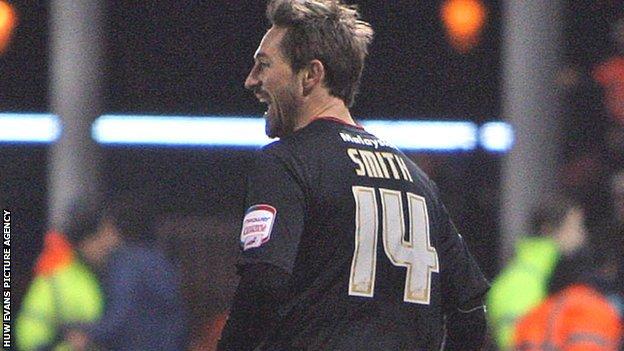 Smith was making his first start since October and crowned a fine display with a superb 64th minute volley - his first goal for the club.

The win lifted Cardiff 10 points clear at the top of the Championship, and earned Smith plaudits from Mackay.

"You can see why I'm delighted to get him back, he's a top quality player," he said.

Smith suffered a torn hamstring in the 2-1 against Watford on 23 October, and made his comeback as a substitute against Ipswich on January 12.

Mackay sees his return as a boost to the club as they continue their drive for promotion to the top flight for the first time since 1960.

"He's someone I know very well as a footballer and know what he can bring to this club and I'm delighted to have him back," said Mackay.

"It was a really bad hamstring tear that he took when he was just getting into his stride in the team as well.

"[Against Blackpool] I thought he was just exceptional."

The manager also revealed the coaching team were planning to substitute Smith on the hour, just before he scored the winner.

"We knew that we were pushing him to his limit just to get him to the point we did," he said.

"Thankfully I didn't take him off five minutes before, but that's management."

The Bluebirds are still in talks with Sunderland over the possible transfer of striker Fraizer Campbell for a fee thought to be in the region of £650,000.

Mackay had hoped to clinch the deal before Cardiff flew to Dubai on Sunday for warm weather training.

However, talks will continue while Mackay and the players are in the Middle East.

"We're still in negotiations and discussions with Sunderland and we're hopeful we can have news next week sometime," he said.