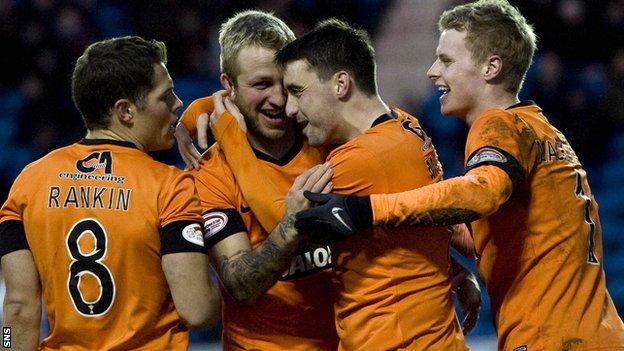 Dundee United manager Peter Houston is determined not to be distracted by talk of who might replace him as he targets a strong finish to the season.

Houston's men beat Kilmarnock 3-2 at the end of a week in which he announced he would be leaving this summer.

"I know what we're trying to do and whoever it may be, good luck to them," he told BBC Scotland.

"I've made a decision. I want to full focus on one thing only and that's the remainder of the season."

The United boss has targeted another top-six finish in the Scottish Premier League and praised the performance at Rugby Park, which featured a hat-trick by Johnny Russell.

"It shows the character that we had, we needed it," he said.

"I don't think anyone can have any complaints about United winning the match.

"It was a big important three points and it was thoroughly merited. The players were, to a man, magnificent. We played some great stuff.

"It was a brilliant performance from the team. We dominated from start to finish.

"I thought if it was a boxing match it would have been stopped."

Russell's hat-trick featured a shot with either foot and a header but Houston, who served as assistant to former Scotland manager Craig Levein, cooled talk of an international call-up for the striker.

"I don't think Johnny Russell is quite ready for the step up to Scotland," he explained.

"He went to the United States [as part of the squad for a friendly last May] and came up short.

"But he's developing all the time and he will be a fine talent. He will get the chance to represent his country, I'm sure"

As well as Russell on form, United had Gary Mackay-Steven back from injury and the winger lit up the first half with a dazzling piece of skill when he held the ball, flicked it up and then headed away as he escaped a group Killie players.

"You just don't know what he's going to do," added Houston.

"Even the Kilmarnock guys were praising that. That's what fans pay to see.

"Young Scottish players with talent like that, that's what we're looking for."