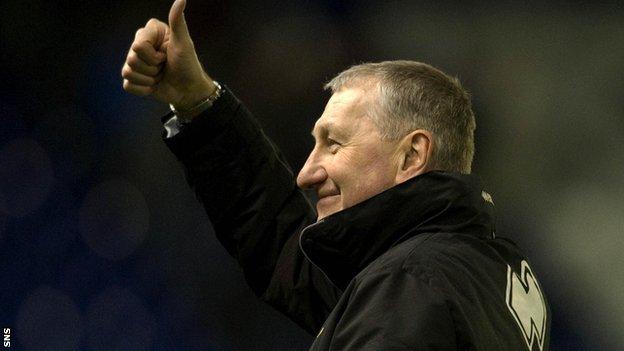 Inverness CT manager Terry Butcher was delighted his side re-discovered their form to blitz Aberdeen at the Caledonian Stadium.

A goal-less first half was followed by a barrage of scoring from the home side in the second.

"I said to the lads at half-time - 'you're a really good second half team, you normally blitz people away in the second half'," said Butcher

"When we got the first goal I didn't have any doubt that we'd go on to win."

He added: "The second half performance was tremendous.

"Good power at the back, but the front four always looked like they could get through Aberdeen."

The ever-impressive Billy McKay netted another two goals against the Dons, with Andrew Shinnie also putting his name on the score-sheet.

"Billy's now scored 20 goals this season so he's had a phenomenal time and there's plenty games to come as well for him to add to that," Butcher told BBC Scotland.

"The whole team's performance in the second half was excellent."

Butcher was especially pleased to get a win under his belt in the first game since turning down interest from Barnsley about the manager's job there.

"I knew one or two would say, if we'd lost the game - 'oh well I bet you regret that decision not to go'," he said.

"I didn't want to have those headlines.

"Me and Maurice [Malpas] know what we've got here with these boys and they know what they've got themselves."

And the former England international expressed his happiness that both the Scottish Premier League's Highland teams won on Saturday.

"We watched it before-hand and if anything we drew inspiration from that.