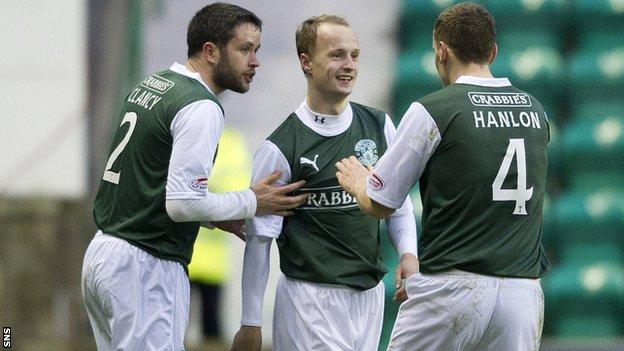 Manager Pat Fenlon was critical of Hibernian's sluggish opening after the 1-1 draw at home with Dundee.

"It was a poor performance, particularly in the first half," said Fenlon. We looked lethargic.

"The last home game against Celtic, we were fantastic, so we can't drop the tempo in relation to the opposition."

Griffiths levelled for the hosts with a second-half free-kick, but it was the visitors who carved out the best chances over the course of the 90 minutes.

"We need to get to a level when we dictate games at home," a frustrated Fenlon added.

"We weren't good enough today. We need to approach all of our games in the right manner.

"We knew they would come and have a go, they are at the stage when there is little to lose."

Fenlon's side ended the first half of the season with a 1-0 win against Celtic and a draw at Hearts but had slipped to defeat at home to Ross County prior to those games.

"As a player, it's all about preparation," he explained.

"We try to prepare them in the same way for every game, whether it be against different teams and with different formations.

"But it's your own personal preparation you need to make sure stays the same week-in, week-out."