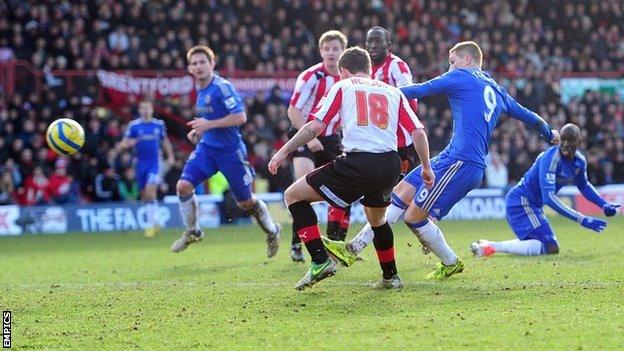 Fernando Torres struck a late equaliser to spare Chelsea the embarrassment of being knocked out of the FA Cup by League One Brentford at Griffin Park.

The £50m Spain striker equalised seven minutes from time as Brentford threatened to heap even more misery on Chelsea and interim manager Rafael Benitez after their midweek Capital One Cup semi-final elimination against Swansea City.

Brentford, third in the third tier of English football, were the better side for long spells in this fourth round tie and twice held the lead through Marcello Trotta's first-half goal and Harry Forrester's penalty 17 minutes from time.

With Chelsea on the brink of an ignominious exit and Benitez facing increasing hostility from the travelling supporters packed at one end of Griffin Park, Torres curled in a superb finish to give the Premier League side the relief of a replay.

Brentford's fans gave their side a standing ovation after an outstanding effort that earns them a lucrative replay at Stamford Bridge - but for a few moments they were dreaming of an even bigger reward.

For Chelsea, the draw was gratefully accepted and they deserve some credit for digging out the result after struggling for so long.

FA Cup holders Chelsea are unbeaten in 25 FA Cup matches (W20, D5), and have lost only one of their last 36 in the regulation 90 minutes.

Griffin Park was liberally laced with everything that makes the FA Cup special - complete with the sort of heavily sanded-surface that can close gaps between teams.

And Chelsea's unease was evident in an early breakdown in communication between captain John Terry - starting his first game under Benitez after injury - and Ross Turnbull which resulted in the 'keeper picking up his backpass in the area. It presented Brentford with a clear opportunity but Forrester, faced with a 10-man Chelsea wall, shot over.

Brentford's brisk tempo unsettled Chelsea, who were not helped by their own lame response to the determination of the Bees to deny them time and space and drive forward at every opportunity.

As Brentford's confidence increased and with it their domination, Adam Forshaw was only inches away from giving them the lead from 20 yards.

The goal they deserved came three minutes before the interval when Turnbull - a desperately uncertain figure throughout - could only push out Forrester's shot after Frank Lampard conceded possession. Trotta took time to steady himself before sending a powerful finish past the stranded keeper.

It resulted in Benitez receiving a furious response from Chelsea's supporters as he made his way off in front of them at half-time - treatment that was repeated when he emerged for the second half.

Benitez made an inevitable change at the restart, sending on Juan Mata for the anonymous Marko Marin, but it was Oscar who provided the moment of inspiration to draw Chelsea level.

He showed quick feet and great imagination inside the area before sending a right-foot strike high past Brentford keeper Simon Moore.

Moore, who had been untroubled until Oscar's goal, was then in action again to save from Mata as Chelsea sensed they were finally exerting some control on proceedings.

Brentford, however, showed real character to rebuild momentum and edge their way back into the game, a strength rewarded as they regained the lead with 17 minutes left.

Clayton Donaldson played in Tom Adeyemi, on for goalscorer Trotta, and he was dragged down by Turnbull as he raced from goal. The keeper was shown the yellow card and Forrester kept his composure to beat Turnbull powerfully to his right from the spot.

Benitez introduced Demba Ba to try to spare Chelsea's humiliation but it was the much-criticised Torres who did the job for his manager with an instinctive curled finish beyond the reach of Moore.