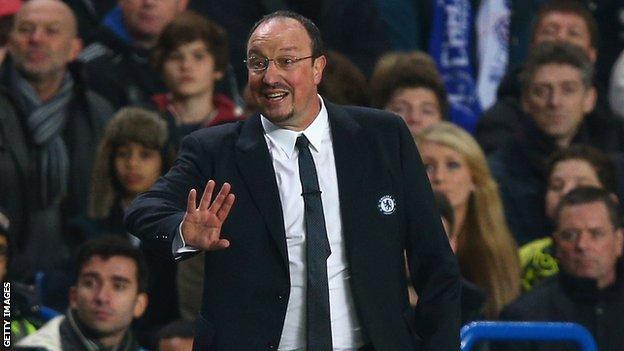 Chelsea interim boss Rafael Benitez has conceded his side will not win the Premier League title.

"In terms of the league I don't think we can do it," Benitez said.

"But the Capital One Cup is there, the FA Cup is still open and the Europa League is still open. I just have to give the team the confidence that we can win against anyone."

The former Liverpool boss added: "If you have that belief it becomes easier.

"The team is very close. We have [John] Terry and [Frank] Lampard back from injury. Now we have to be more consistent."

Chelsea, who have won nine, drawn three and lost four of Benitez's 16 games in charge, after squandering a 2-0 half-time lead.

"It's always important when you have a draw at home to have a big challenge ahead of you," he said.

"To have Arsenal is a very good thing for me and the players. They are a rival who are close to us. We have to use that as a positive.

"They are close [in the league], and if we win there'll be a big difference."

following Roberto Di Matteo's sacking with the Blues still in the Champions League, albeit on the brink of elimination, and only four points off top spot in the Premier League.

He was only given a contract until the end of the season, with owner Roman Abramovich believed to be keen to appoint Pep Guardiola in the summer, but the former Barcelona boss has since agreed to join Bayern Munich.