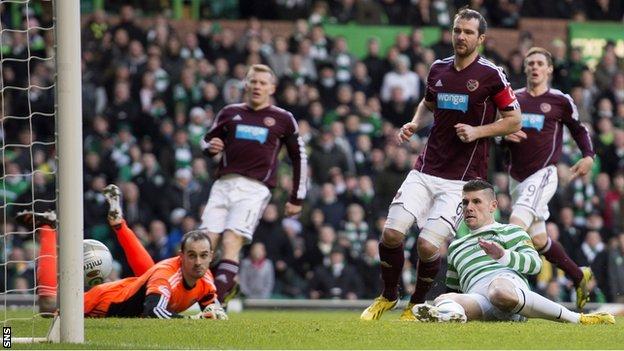 "You can't come to Celtic Park and lose a goal after 90 seconds. You are going to have an uphill battle," he said.

"We had a lot of young players on the pitch and they need to learn.

"We have to outwork Celtic because they have better players than us. It was too easy for Celtic."

That early goal was scored by Gary Hooper, and McGlynn, who pointed out that Hearts started with five under-21s, was annoyed to see Georgios Samaras add a second for Celtic before quarter of an hour had been played.

However, he did find grounds for optimism in his team's refusal to cave in, before Lassad and Hooper extinguished any hopes Hearts had of stealing a point after Jason Holt's 69th minute deflected goal.

He told BBC Radio Scotland: "We lost another goal 15 minutes into the game so at that point, an hour and a quarter to go, to get ourselves back into a 2-1 situation with five minutes to go, you've got to be positive about that.

"We didn't crumble, we stuck to our task and we worked our way back into the game.

"Jason Holt got the goal back and to lose two very soft goals so late is rubbing salt in the wound.

"I was about to make a positive substitution to go 4-4-2 and we lost the goal at that time.

"They moved the ball a slot slicker than us today."

McGlynn was pleased with defender Danny Wilson, 21, who made his debut after joining Hearts on loan for the rest of the season from Liverpool yesterday.

He said: "I thought he acquitted himself very well. He has been playing games and he will certainly be a good acquisition between now and the end of the season."