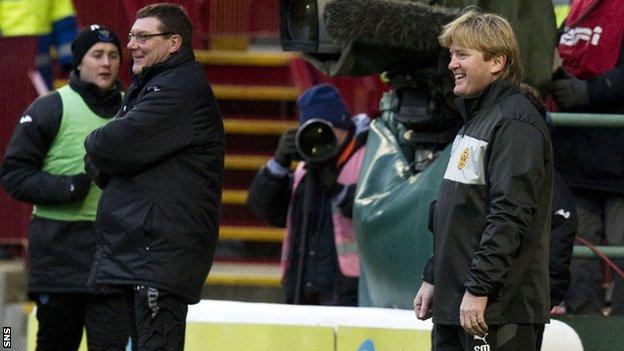 Motherwell manager Stuart McCall was relieved to get to the final whistle after hanging on to win against St Johnstone.

And he was keen to focus on the positives of their 10th Scottish Premier League win of the season.

"A win's a win. This season we've played a lot better and got nothing, so we're happy with what we've done today," McCall told BBC Scotland.

"It's been a cold winter's day but three points will warm us up."

Michael Higdon's hat-trick had Motherwell thinking they were home and dry after 70 minutes.

However, St Johnstone pulled two back through Nigel Hasselbaink and Liam Craig to set up a nervous final 10 minutes.

"We made hard work of it," said McCall.

"At 3-0 we should see it out but fair play to them [St Johnstone] who kept at it.

"It's three points and three goals again at home which is good."

It was a baptism of fire for Motherwell's substitute goalkeeper Lee Hollis, who replaced the injured Darren Randolph just before Saints scored twice.

But, crucially, he denied Hasselbaink in the closing minutes of the game to prevent a draw.

"He certainly had a vital save to get us all three points," said McCall.

"He had no chance with the two great strikes by them.

"With the underground heating having to be on, the pitch becomes really bumpy.

Motherwell remain in third place in the SPL, but are now level on points with second-placed Inverness CT.