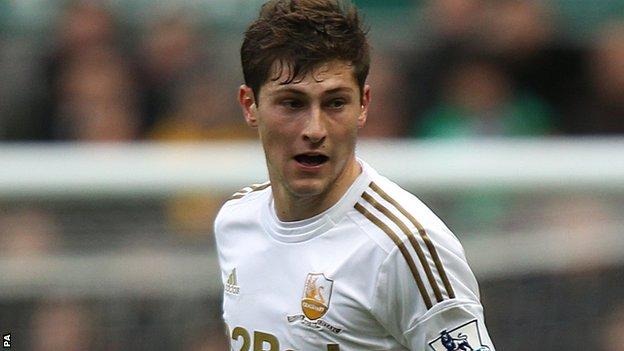 Left-back Ben Davies says he has grown in confidence since he was handed his first team chance with Swansea City.

The 19-year-old has become a regular after Neil Taylor suffered a serious ankle injury early in the season.

"When you first come into the team you don't want to make mistakes and now I feel a lot more confident," Davies said.

"It feels as if my place is there for me to push on and I've got to show what I can do going forward as well as defensively to stay in the team.

"I hope I can keep getting forward at every opportunity and if I get the chances I hope to get them in the net."

Davies made his Swansea debut as an 84th minute substitute against West Ham at the Liberty Stadium in August.

He has since established himself as Swansea's first choice left-back after Taylor suffered a serious ankle injury in the match against Sunderland on 1 September last year.

And Davies has also been given his chance by Wales in Taylor's absence, making his debut in the win against Scotland last October.

Another milestone in his career was achieved on Saturday when he scored his first senior goal in Swansea's win over Stoke.

Davies had gone close in the first half before he kept his composure to fire a shot past Asmir Begovic to give Swansea the lead.

"It was a great feeling to get my first goal in professional football," Davies said.

"I was a bit shocked more than anything to see it go in. It was a great feeling.

"I got forward quite a bit and it was a good block by Robert Huth [for the first chance].

"The second time I had a chance I was a lot more composed and managed to hit the target. That was my aim and the ball went in."

Swansea's victory over Stoke came ahead of the midweek Capital One Cup semi-final tie with Chelsea.

They hold a two-goal lead over Rafa Benitez's side going into Wednesday's second leg at the Liberty Stadium.

"It gives us a lot of confidence going into that game," Davies.

"I think we've just got to keep playing in the same way we do and try and keep the ball as much as we can.

"Hopefully we'll be able to keep the score the same as it is now."