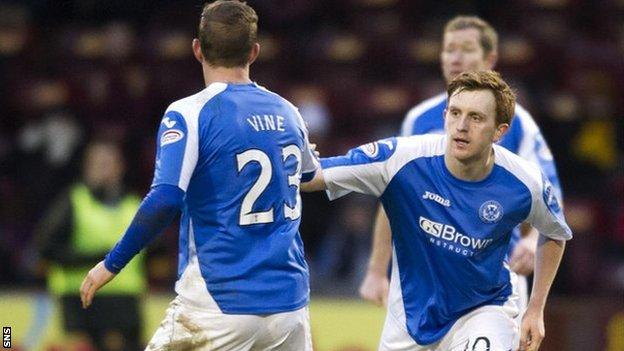 "I'm extremely disappointed with the result, not the performance," said Wright after Saints' late comeback fell just short of cancelling out Michael Higdon's hat-trick for the home side.

"We will try to take positives out of that game.

"We have shown that we can come here and compete against a very good side."

Motherwell's win put the Fir Park side level on points with second-placed Inverness in the Scottish Premier League.

But they had to fight for it in the end, even though Higdon's trio had them three goals to the good with 21 minutes remaining against a St Johnstone side missing its key player - Murray Davidson ruled out with an ankle injury.

Saints had plenty of possession in the first half but rarely troubled Motherwell goalkeeper Darren Randolph, who had hobbled off with what looked like a hamstring injury by the time Nigel Hasselbaink and Liam Craig set up a tense finale with their goals in 77 and 79 minutes respectively.

"We did well, particularly in the first half. We didn't deserve to be 2-0 down," was Wright's assessment of the match when speaking to BBC Radio Scotland.

"Motherwell had two or three chances and they were clinical.

"We probably didn't make enough of the opportunities we had in the first half.

"In the second half it was pretty even. We looked to be out of the game but fair play to the lads, they showed a desire to get back into it.

"Even in defeat we can take a lot out of the day's game.

"If you come here and get turned over, you'd be a bit more concerned. We put an awful lot into the game and people will see we weren't far away today."

Asked about Merseyside striker Higdon, Wright added: "He is quite a handful and someone who does score a lot of goals. Unfortunately today we couldn't keep him quiet."