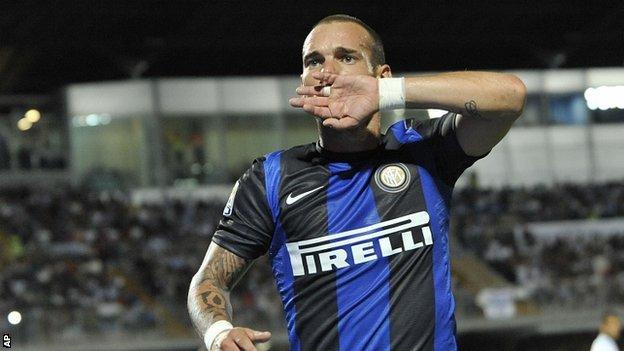 Galatasaray have completed the signing of Dutch playmaker Wesley Sneijder from Inter Milan for a fee believed to be in the region of £8.4m.

The 28-year-old penned a reported three-and-half year contract at a ceremony at the club's Turk Telekom Arena after passing a medical.

"It will be amazing and the atmosphere will be nice," Sneijder told the club's official website before signing.

"I can't wait to go there and play my first game."

The former Ajax and Real Madrid man added: "I will make the Galatasaray fans very proud and very happy. I'm looking forward to meeting them and making a good life together."

Sneijder had been keen on a move to the Premier League, according to his agent Soren Lerby, but a serious offer from England never materialised.

The Dutch international, who was strongly linked with Manchester United in the summer of 2011, has not played for Inter since 25 September because of a dispute over his contract.

In November, the Italian side informed Sneijder he would not play for them until he agreed to a significant cut in his salary.

The player refused, meaning he has been on the sidelines despite being fit for the past two months.

Sneijder joined Inter from Real Madrid in 2009 and helped them win an historic treble of the Serie A title, Champions League and Italian Cup in his first season.

He was also the inspiration for the Netherlands as they reached the 2010 World Cup final.