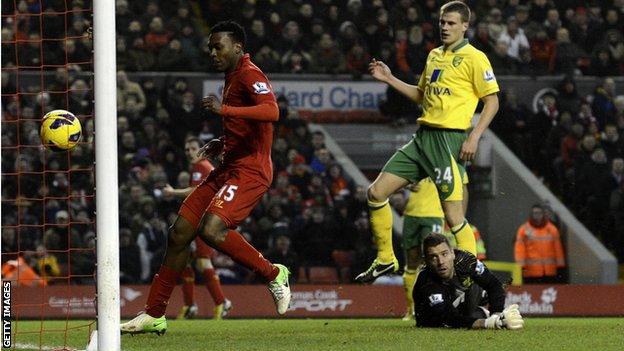 Norwich City manager Chris Hughton said he did not need Saturday's 5-0 loss at Liverpool to make him realise the Canaries require new signings.

The defeat means Norwich have now taken just one point from their last 18.

"It doesn't take that performance for me to know that we need to improve the squad we've got," said Hughton.

"Offers have been put in for both players, the communication is between club and club. There was a statement from Celtic: Hooper is their player, and we'll just have to see where it takes us.

"But what I won't allow is a result like that to affect the way we move on, because we've been better than that.

"We've had a bad day and when you do you hope you don't concede goals. Unfortunately we were up against a very good Liverpool side playing very expansively, and their finishing was very clinical, but we had to get closer to them and make sure we weren't making the mistakes we made for the goals.

"If we'd stayed in the game something might have opened up, but we weren't near the standards we normally are and we have to address that."

Despite being 2-0 down at half-time Hughton chose not to bring on an extra striker.

"We weren't playing well enough. What we wanted to do was try and make sure we at least had periods of keeping the ball, and then work our way into the game. Then you can make changes," he said.

"We know we're better than that, better defensively, and we have to do better than what we did on the ball. Now it's how we bounce back and generally we've done that well this season."

Hughton confirmed defender Sebastian Bassong had not been considered fit enough to play at Anfield.

"He's had a little problem with his calf and the right decision was not to play him - it's about the season, not one game," he added.

The 29-year-old played a key role in promotions from League One and the Championship under Paul Lambert, making 126 appearances.

His last appearance came in City's 4-0 third round FA Cup win at Peterborough earlier this month.