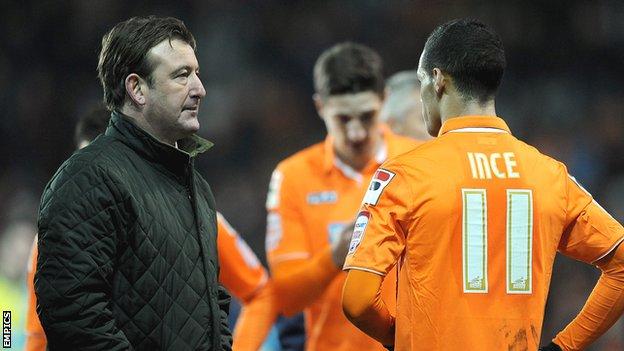 Caretaker manager Steve Thompson has conceded that the uncertainty surrounding the managerial position at Blackpool is not helping his players.

Thompson is in temporary charge for the second time this season.

He told BBC Radio Lancashire: "Every week, there just seems to be some sort of blip - from the manager leaving, to losing four players [to illness] before

"Somewhere along the line, we're due a little change of luck."

We see the speculation and we hear managers turning it down. All I can say is I'm ready to be a number one

Thompson added: "The lads are down in there but we've got to make sure we lift them and I will do."

and have rejected the chance to speak to Blackpool about the vacancy, while a tentative approach was made to

"We see the speculation and we hear managers turning it down," added Thompson, who served as assistant to both Holloway and Appleton. "All I can say is I'm ready to be a number one.

"Whatever role [chairman] Karl Oyston sees me having at this place, I'll do it to the best of my ability, like I'm doing now. Until I hear any different, I'll keep getting these lads going."

Blackpool, who were beaten 2-1 by Championship leaders Cardiff on Saturday, have gone eight games without a victory and have not won since 15 December.